The striking long-distance runner Emily Infeld is a force to be reckoned with both on and off the track. Launching the start of her running career at Georgetown University, the American athlete immediately became a recognizable face in the world of track and athletics by becoming the 3000 meter NCAA Indoor Championships winner in 2012 and placing second in outdoor track and cross-country tournaments. Despite suffering severe recurring injuries at the start of her professional career, in 2015 Infeld made a dazzling comeback which would show the world that she was as fearless as she was talented.

A veteran of the 10k track – at one point she ranked 6th in the world – Infeld has participated in an assortment of major global championships in which she represented the USA. Infeld has represented her national team in the 2013 IAAF World Cross Country Championships, the 2015 World Championships in Athletics, the 2016 Summer Olympics and the World Championships in Athletics in 2017. Each engagement on behalf of the National team has proved to be immensely fruitful for both the USA and Infeld herself as her determination and capability has resulted in solidifying her dominance on the track both domestically and internationally.

The captivating style of Infeld’s athletic persona attracts fans far and wide to her social media pages in which she provides updates on her training and motivational exercise tips alongside an insight into her amusing friendships with her teammates and her most coveted recipes. Infeld’s engaging persona has been noticed by key brands including Nike, Clif Bar, Sidekick and Formula 1006, thus solidifying her ascending rise to global domination. 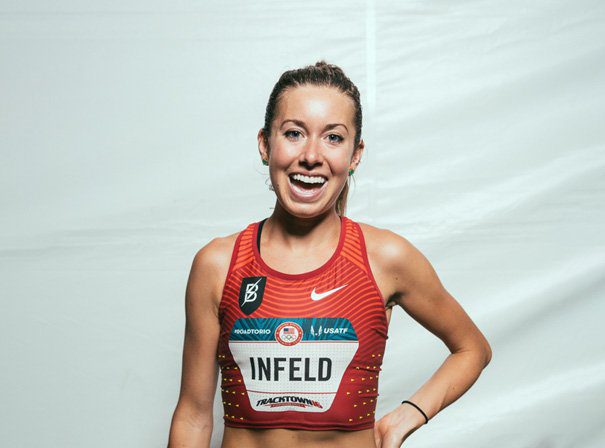