With over 6 million albums sold worldwide and their2019 hit single “Fancy” racking up 42.1 million YouTube hits in 24 hours – makingit the seventh largest YouTube debut of all time -multinational girl band TWICEare proving to be an unstoppable force in K-Pop. Having already reachedplatinum in Japan with their first single “One More Time”, the girls shot toglobal stardom when their debut album “Twicetagram” and lead single “Likey”shot to No 1 on Billboard’s world albums and world digital song sales charts becomingthe fifth highest selling K-Pop album of 2016.

The group, comprising Japanese, Korean and Taiwanese members, formed through the 2015 reality TV show Sixteen; the show’s producers, JYP Entertainment, initially planned to create a seven-member girl group, but in a shock season finale, JYP announced that contestants Tzuyu and Momo would join the group. TWICE describe themselves as “colour pop” and their fondness for all things fluorescent can be seen in their videos and heard in their upbeat, playful bubble-gum pop songs.

Their technicolour mix of pop, dance and hip-hop has proven to be infectiously catchy and wildly popular: their video for the hit single “Fancy” has received over 125 Million streams to date. The band’s second studio album BDZ, recorded in Japanese and released in September 2018, propelled them to stardom in Japan with their latest EP “Fancy You” making them the highest selling Korean girl group of all time. 2019 has seen them embark on an international tour,  performing their first headline dates in the US and Europe. With their global popularity soaring, TWICE are set to become one of K-Pop’s most famous and successful groups. 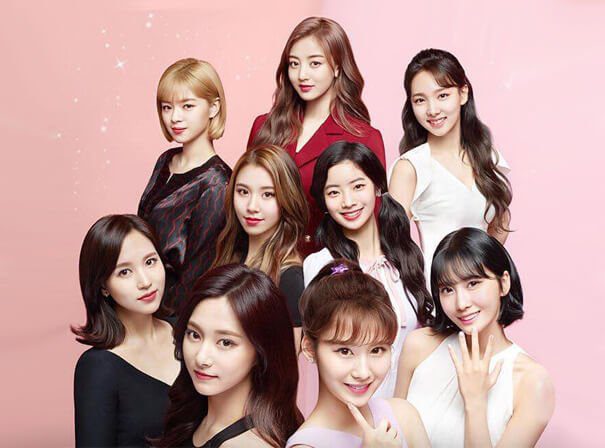