Adam Zemenak is a drummer from Missouri-based band Shaman’s Harvest, which is a classic rock band that has seen huge success in a short period of time. Shaman’s Harvest released single Shine, from their four album, which reached number 16 on Billboard’s Active Rock chart, nine at Heritage Rock, and 34 on Billboard’s Rock Songs chart, selling over 130,000 copies and the album itself 33,000. Shine featured on the soundtrack of motion picture Legendary, however it is their latest album Red Hands Black Deeds, which was inspired by the struggling US Political landscape during the 2016 general election, that has proved their most popular work. Zemenak especially worked well on this album, with the band itself having a departure in terms of thematic and lyrical content which clearly resonated well, being number 1 on the Heatseekers Album Chart.

Zemenak went with the band on tour supporting Nickelback, which called for the drummer to be incredibly big on his beats for a massive, stadium-filling sound. The drummer is also a huge fan of taking part in charity event, joining Drummathons for women who don’t have health benefits so they can still receive mammograms. Zemenak is known to be a laid back rockstar, and is looking forward to the growth that Shaman’s Harvest will continue to display in their next musical work. 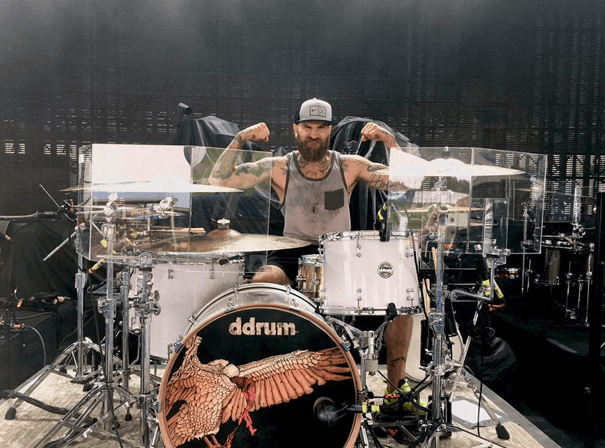