After an incredible 2019, sensational shooter Apurvi Chandela is one of India’s biggest medal hopes at the Tokyo Olympics. Chandela won five World Cup medals in 2019 including two individual gold medals in 10 metre air rifle in New Delhi and Munich and a gold in the Mixed Team 10 metre air rifle event in Rio de Janeiro. Chandela secured gold in a spectacular fashion in New Delhi, e setting a new world record of 252.9 points from 24 final shots shattering Zhao Ruozhu of China’s record of 252.4. Chandela has already competed at the Rio Olympic Games in 2016, and her biggest dream is to win a medal in Tokyo.

Born in Jaipur, India, Chandela rose to prominence in her first year on the senior circuit in 2012 when she won the gold medal in the 10 metres air rifle at the National shooting championships in New Delhi. In 2014 she became Commonwealth champion winning gold in Glasgow after scoring 206.7 in final – a new Commonwealth Games record. In 2016 she qualified for her first Olympic Games in Rio, and two years later she bagged a bronze medal at the 2018 Asian Games in the 10m air rifle mixed team event alongside Ravi Kumar.

2019 proved to be a hugely successful year for Chandela and she picked up five World Cup medals in total. With the Tokyo Olympic games now drawing closer, her impressive form has come at the right time. 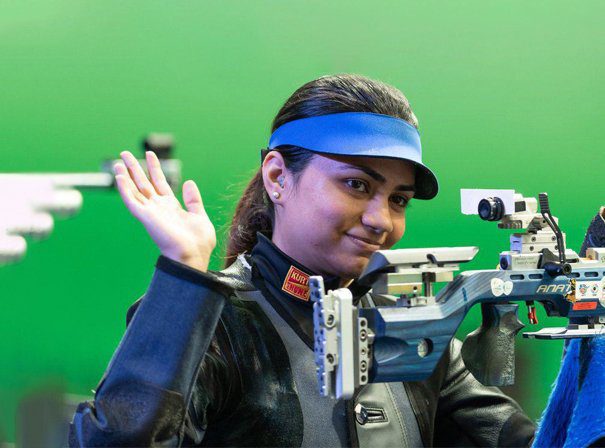