Bo Jackson is unique in American sports. He is the only person in history to have been named an All-Star in both Major League Baseball and the NFL. Widely regarded as one of the best sportsmen the world has ever seen (a 2019 ESPN poll voted him the Greatest Athlete of All-Time), he became a star during the 1980s and 1990s, and is still widely loved today — the L.A. Lakers, a team he left over 30 years ago, still sell shirts with his name on.

Born Vincent Edward Jackson, Bo’s prodigious sporting talents became evident during high school, where he excelled in football, baseball, and athletics. In the latter, he twice became Alabama State Decathlon Champion, both times building up such an unassailable lead that he won without competing in the final event. He was offered an MLB contract in the first round of the 1982 draft but passed it over to attend college, where he became one of the greatest college football players of all-time, twice being named an All-American (his university retired his number when he graduated).

Jackson’s professional sports career finally began in the late 1980s with the Kansas City Royals. It was with them in 1989 that he was named an American League All-Star, among many other plaudits he won during his career. In 1987, he began a simultaneous NFL career with the L.A. Raiders, becoming the highest-paid non-quarterback in league history. He set records that still stand today and only stopped playing when an injury forced it. Nevertheless, he continued to play baseball. Without a doubt, he is one of the all-time greats. 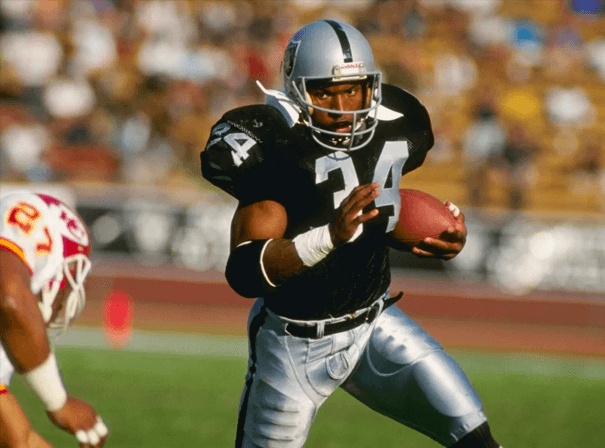