Brian Heffron aka the Blue Meanie

Brian Heffron may not be a familiar name to many, but ask a wrestling fan who The Blue Meanie is, and they’ll know exactly who you mean. Heffron is best known for his career as an American professional wrestler, and for his remarkable appearances with ECW from 1995 to 2000, but more currently, his work with wrestling giants WWE from 1998 to 2005.

Beginning his wrestling career at Al Snow’s Bodyslammers Pro Wrestling Gym, Heffron quickly discovered a deep seated passion for the sport, and continued to wrestle in a variety of independent wrestling promotions for several years, building up a fan base, before being noticed by Raven and Stevie Richards and officially joining their act in 1996. This was where The Blue Meanie was born, and Heffron found crowds loved to see him in the ring, enjoying his slapstick and comedic style.

However, it was his debut to WWE that truly made The Blue Meanie a firm fan favourite. First appearing with the WWE in 1998, he was reworked as Bluedust, in answer to fellow wrestler Goldust, and rose to prominence in their first battle named St. Valentines Day Massacre: In Your House. He also made headlines in a fight against fellow wrestler JBL, where he sustained obvious injuries, but has since buried the hatchet. Heffron then left WWE, and in 2007, defeated Troy Justice to become APWF Heavyweight Champion before settling as a wrestler and trainer at wrestling house Monster Factory.

Most recently, in 2020, Heffron began his own podcast , titled Mind Of Meanie, with co-host Josh Shernoff where they discuss various aspects of the world of wrestling. This has since branched out into a brand, featuring merchandise, spinoff video series, and a cartoon series called MeanieToons. 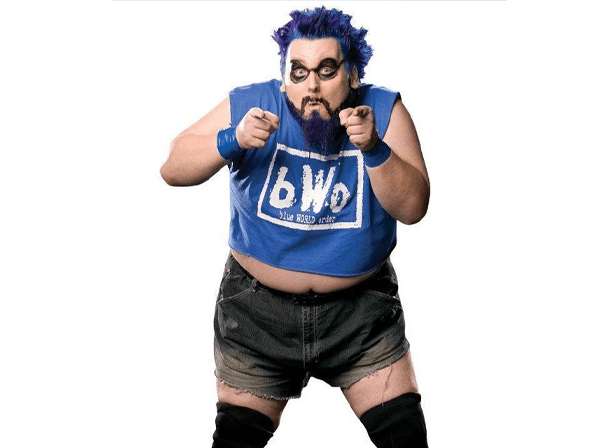 Brian Heffron aka the Blue Meanie