With one of the most recognizable voices in the world, Bruce Buffer has become the soundtrack to some of the most notable sporting events in history. Buffer seriously began martial arts training at the age of 13 with his natural talents leading him to gain a second-degree black belt in the art of Tang Soo Do, after being trained by two students of the legendary Chuck Norris. Despite Buffer’s clear passion for martial arts, in 1996, decided to give up the professional fighting ring by transitioning to a career in UFC announcing. In this arena, Buffer has found enormous success as one of the most prolific voices in global sports by announcing some of the most widely watched events in the world. Buffer is known for his catchphrase, ‘It’s Time!’ which rings in the ears of those that aren’t even big fans of UFC. Buffer’s booming voice alongside his trademark announcing move the ‘Buffer 180’, established the announcer as the cherry on top of the most important UFC fights. Sought after by fans and competitors alike, Buffer’s presence on the ring is so revered that he has become one of the biggest stars of UFC.

Buffer’s immediately recognizable voice has led to wider success outside the UFC ring and has managed to cultivate a celebrity following. Appearing on beloved television shows such as Friends, Entourage, Tosh.0 and Hot Tub Time Machine, Buffer has also lent his voice to numerous video games and the hit pop song ‘It’s Time’. Proving there is no stopping Buffer, the announcer has also competed in the highest level of Poker tournaments as well as being CEO of The Buffer Partnership, a company he runs alongside his long-lost brother, the former boxer Michael Buffer. With a powerful set of lungs and a dazzling public persona, it is clear that Buffer will remain the unmistakable voice of UFC fighting. 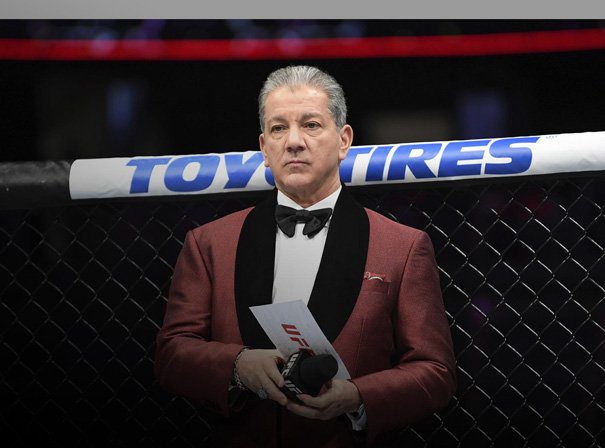