Casey Kaufhold is a rising star of archery who shot the highest score of any woman in U.S. history days before her 14th birthday. At the U.S. National Indoor Championships in 2018 – when she was just 13 years old – Kaufhold smashed the senior, junior and cadet national records over two days of competition with a score of 1162 out of 1200. A year later she stole the show at the Pan American Games in Lima, taking home gold in the women’s team recurve final , gold in the mixed team recurve final and winning bronze in the individual women’s recurve.

Kaufhold grew up in Lancaster, Pennsylvania next door to her parent’s archery store, and started shooting a bow when she was only 3 years old. She began competing with an Olympic recurve bow at age 8 and started taking part in national competitions when she was 11. Throughout her meteoric rise to success Kaufhold has been mentored by the only American women’s archer who qualified for the Rio Summer Olympic Games in 2016 – Mackenzie Brown. With support from both Brown and her family, Kaufhold has trained hard to become a more consistent archer, and at the U.S. Open in 2018 Kaufhold edged her mentor by one point to win the women’s recurve division title.

With an already impressive record, Kaufhold is a strong contender to make the US archery team in the upcoming Tokyo Games. 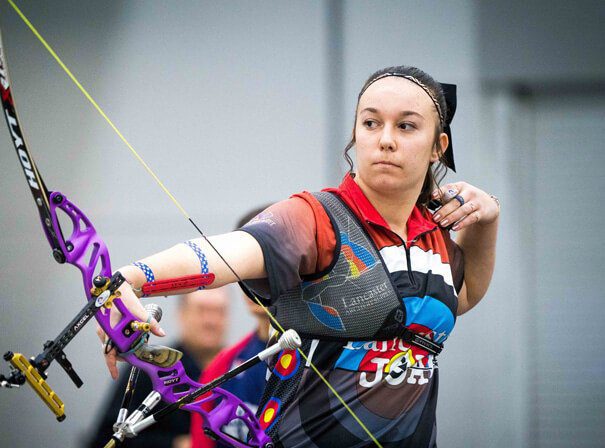