Inspirational Canadian Christine Petitclerc has received many honours and awards for her achievements as a para-athlete and, latterly, a member of the Canadian Senate. As a wheelchair racer, she won an amazing 14 gold medals at successive Paralympic Games between 1996 and 2008. Even several years after her retirement, she still held five world records for her sport, and to this day she remains the most-medalled female para-athlete of all-time. She is an inductee of both the Canadian Paralympian Hall of Fame and Canada’s Sports Hall of Fame. She has a star on Canada’s Walk of Fame and has been invested as a Knight of Quebec and a Companion of the Order of Canada, among various other civic and royal honours. She has been an independent member of the Senate of Canada since 2016.

Petitclerc was born in Quebec in December 1969. Aged 13, she was the victim of a tragic accident when a heavy barn door fell on her at a friend’s farm, leaving her paralysed from the waist down. At high school, a high school teacher taught her to swim as she couldn’t participate in gym classes, and then, when she was 18, she was introduced to wheelchair sports. She made her debut on the world stage at the 1992 Paralympics in Barcelona, winning two bronze medals. Her breakthrough came at the Atlanta games four years later when she won two gold medals.

At the height of her sporting success, Petitclerc took five golds apiece from the 2004 and 2008 Games, sealing her reputation as one of the most inspirational competitors ever to grace the track. 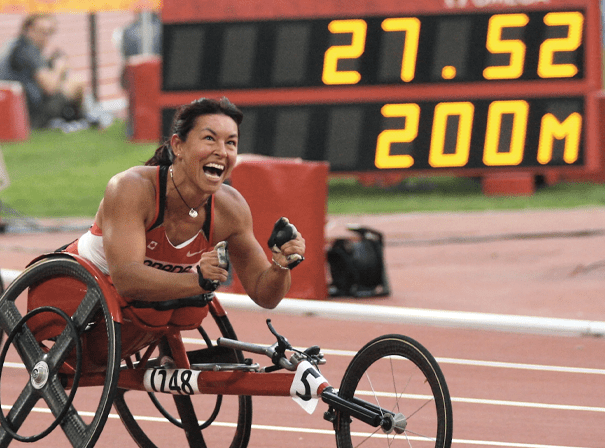