Fierce heavy metal bassist Chris Kael has been an integral member of the metal scene for over 20 years, as well as the legendary band Five Finger Death Punch. Before joining the band, Kael was already an active member in the metal scene with the band 12v Negative Earth, featuring in the 2004 album Heroes Defeated. In 2011 he joined award-winning and multi-platinum album band Five Finger Death Punch, immediately becoming one of its most exciting members. His first project with the band was their 2011 album American Capitalist, who’s single “Coming Down” won the band an Independent Music Award for Best Metal/Hardcore Song in 2013.

Kael begun touring extensively with the band and playing in major festivals such as the Trespass America Festival and Mayhem Festival. In 2013 the band released one of their most successful albums to date, The Wrong Side of Heaven and the Righteous Side of Hell. The album’s Volume 1 reached No.2 on Billboard’s 200 and the album’s track “Wrong Side of Heaven” has since accumulated 210 million streams. Volume 2 then went on to also reach a No.2 spot on Billboard’s 200 with its single “Battle Born”. Kael continued to tour with the band before then releasing their 6th album, Got Your Six, in 2015, which included the track “Jekyll and Hyde”, since reaching 175 million streams.

The band continued to release successful albums, tour with Breaking Benjamin in 2018 and collaborate with legends such as Brian May and Brantley Gilbert. In 2019, their album F8 topped Billboard’s Mainstream Rock Songs with both its singles “Inside Out” and “A Little Bit Off”. Kael continues to tour with the band and work on new projects. His electrifying presence and unique artistry have brought him to becoming one the band’s most important members and metal’s most influential bassists. 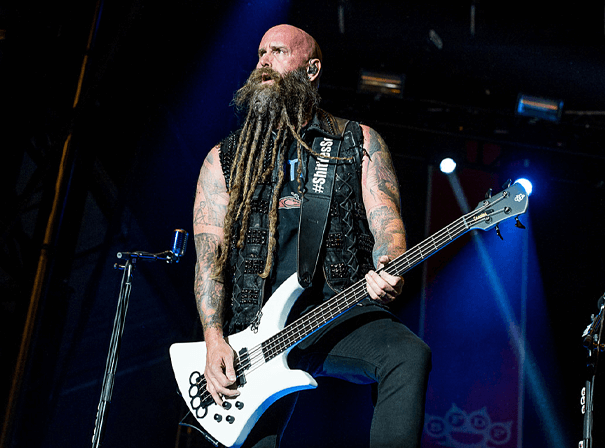