Welsh player Clayton Blackmore has had an impressive Soccering career, best known for his time at Manchester United – after joining the youth team at only 14 years old – he also turned out 39 times for his national team of Wales. Considered to be a versatile and combative player he could switch easily between midfield and defence, it was this utility that contributed to Manchester United winning the Premier League, FA Cup, Charity Shield, European Cup Winners Cup and the European Super Cup.

After a distinguished career at Old Trafford – where he played under manager Alex Ferguson and is still considered a legend – Blackmore enjoyed stints with Middlesborough, Notts County and Barnsley before returning home and becoming manager for non-league Bangor City and Porthmadog. Despite retiring in 2007 Blackmore still works in Soccer and is a member of the coaching staff at the Dynamo Brest Academy, holding a UEFA A License.

Blackmore also excels at his other love of golf, becoming professional and regularly attending fundraisers with his family and promoting the sport. He can often be heard discussing sport on ITV, the BBC and of course, MUTV and recently penned his autobiography ‘Red, White & Blackmore’, full of juicy anecdotes from an exciting time in British Soccer. Articulate, interesting and now the father of twins, Blackmore speaks regularly about competition and success and his various achievements. 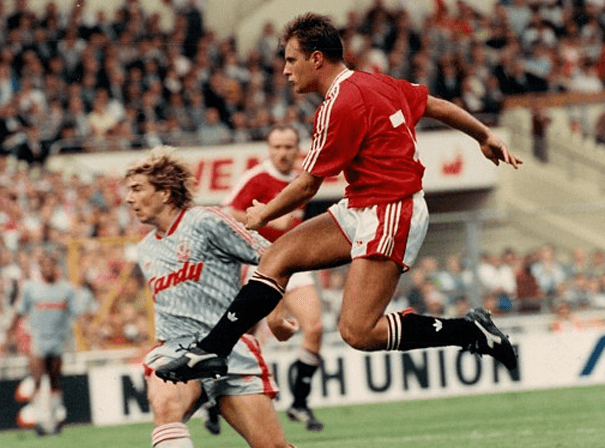