Ed “Coach O” Orgeron is the head football coach at Louisiana State University, a role he has held since 2016. In 2019, he had an incredible year, leading the LSU Tigers to victory in the SEC and SEC Western divisions and the National Championships. He won a plethora of Coach of the Year Awards, including the Associated Press and SEC Awards. In the fall of 2020, he published his first book, Flip the Script: Lessons Learned on the Road to a Championship, which shared his fascinating story and provided many brilliant insights.

Orgeron was a college football player himself, and after graduating, moved into coaching rather than playing. He got his first role in 1984, working as a graduate assistant at Northwestern State. Over the next 20 years, he built up a formidable resume, working at universities across America in a range of positions. By 2003, he had become assistant head coach of the University of South California (USC) team. He then spent time with the Ole Miss Rebels at the University of Mississippi and others before returning to USC in 2010 for his first head coach position – by this point, he’d become of the highest-paid assistant coaches in college sports. In 2015, Orgeron moved to the LSU Tigers, initially as a defensive line coach. Within a year, he’d become head coach and so their path towards their all-conquering 2019 season began.

Orgeron is a well-loved personality across the media – as well as his successful books and regular media spots, he also has nearly a quarter of a million followers on Twitter, which is more than most professional players manage! 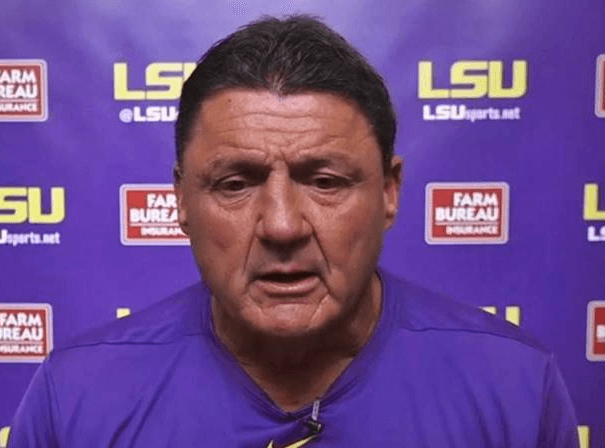