Ranked Britain’s No.1 player, Birmingham born hard-hitting right-hander Dan Evans, has been impressing the tennis world for over 14 years. Having reached 5 Grand Slam 3rd rounds, including both the Australian Open and US Open, Dan Evans will go down in history as one of Great Britain’s best tennis players. After turning pro in 2006, Dan quickly began building a name for himself. He reached the quarter-finals in both the junior Australian and US slams in 2007 and 2008 respectively. This also included a doubles quarter-final with partner Dan Cox. In 2008, Dan Evans began at the National Tennis Centre, and in August, won his first senior title at a Futures event in Wrexham as well as in London and Glasgow in the months following. He ended the impressive year by winning the LTA Male Junior Player of the Year award and ranking No.477 in the world at the age of only 18. Dan made his Davis Cup debut in 2009, and in the years following, powered through singles titles and several international wins in everywhere from Canada to Sweden. His tactical and adaptable gameplay then saw him rise to the world No.149 and Britain’s No.2 in 2013. 2013 also saw him defeat Kei Nishikori and Bernard Tomic in the US Open. Only two years later in 2015, he was part of a winning Davis Cup team. As of 2017, he has achieved the 4th round in the Australian Open, reached the finals in the 2017 Apia International Sydney competition and in 2019, became Britain’s No.1 player. In 2020 he gained a world ranking of No.28 in March. A long, varied and fruitful career has seen Dan Evans become one of the most successful British tennis exports. 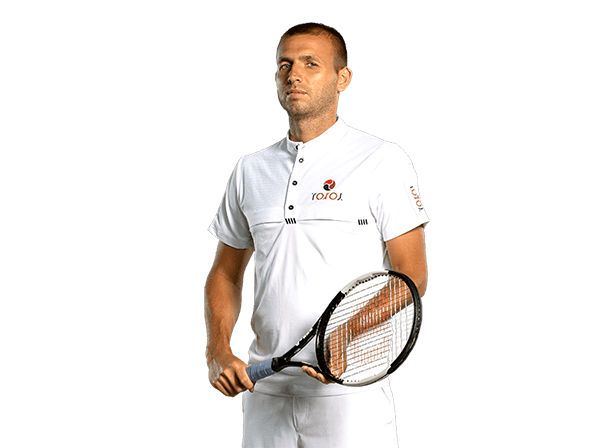