Leading the league in tackles and becoming All-Pro Defensive Rookie of the Year, Darius Leonard put in an impressive series of powerful performances during his first season in the NFL. A starting team regular since the very first game of the season, the 6’2” Indianapolis Colts’ Linebacker is proving to be one of the most promising new defensive players in several years.

Leonard first proved his athletic excellence at South Carolina University, leading tackles in his freshman year and earning several notable accolades, including two consecutive receipts of the MEAC Defensive Player of the Year Award. Stunning displays at both the 2018 Senior Bowl and South Carolina State Pro Day placed Leonard in an excellent position going into the 2018 NFL Draft, where he was unsurprisingly snapped up in the second round, signing a $7 million deal with the Indianapolis Colts. Unlike most rookie players, Leonard was thrust into the starting team from game one, going on to record a season-high of 19 combined tackles against the Washington Redskins to earn him AFC Defensive Player of the Week. Racking up a total of 163 tackles throughout the season, Leonard demonstrated his overwhelming stopping power and forceful presence on the field, cementing his place as one of the Colts’ best recent acquisitions in many years.

With his first daughter arriving in March 2019, Leonard now has all the more motivation to dominate the field with his outstanding defensive abilities for many seasons to come. Judging from his initial efforts, there’s little reason to doubt his potential to go down in history as an all-time great. 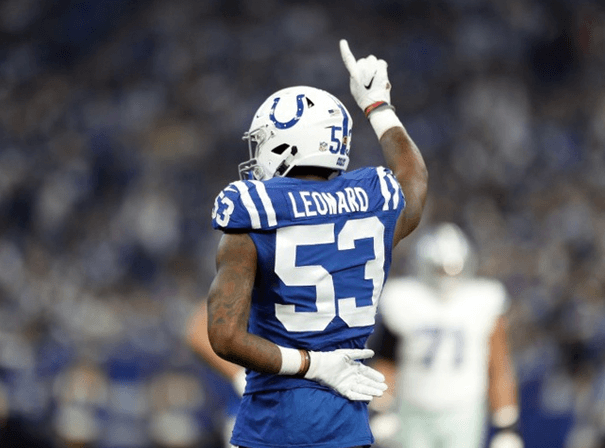