Delanie Walker is a three-time Pro Bowler and the 2017 Pro Bowl Offensive MVP Footballer currently playing for the Tennessee Titans. His football career began in high school where he earned recognition as first-team All-Region and All-Division while receiving All-San Gabriel Valley honors, and was chosen twice as the Miramonte League Offensive Player of the Year. His football career continued into college at University of Central Missouri, where Walker was inducted into the Central Missouri Athletic Hall of Fame.

Walker’s professional football career began when he was drafted by the San Francisco 49ers in the sixth round of the 2006 NFL Draft. He was with the 49ers until the 2012 season before he left for the Tennessee Titans in 2013. The following year, he broke the Titans’ tight end receiving yards record and became only the ninth tight end to ever record 90+ catches in a single season. Unsurprisingly, he was named to his first career Pro Bowl. In the 2018 season, Walker was named to his third consecutive Pro Bowl and was also named the 2018 Pro Bowl offensive MVP after catching the game-winning touchdown.

Over the seasons, fellow football players have voted for him as one of the NFL Top 100 players with his ranking continually improving from 89 to 72 in 2018. He continues to play an integral part in the Titans football team: when he suffered an ankle injury in the 2018 season, the Titans were unable to qualify for the playoffs. 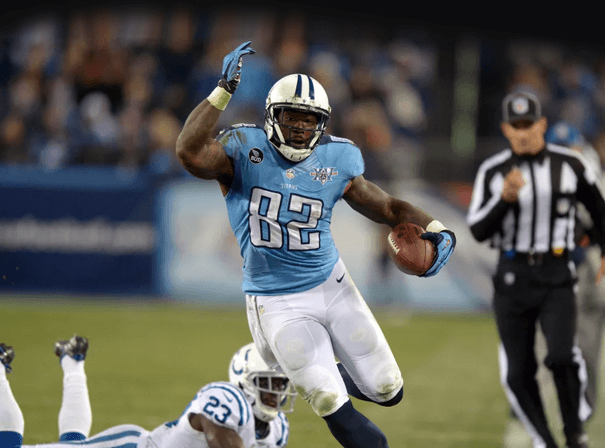