NFL hotshot Derrick Brown is a defensive tackle with the Carolina Panthers. He attended Auburn University and was picked in the first round of the 2020 NFL Draft by the Carolina Panthers. At Lanier High School in Buford, Georgia, Brown had 33.5 QB sacks, 270 tackles, 5 forced fumbles, and 3 interceptions and was regarded as one of the greatest high school defensive tackles in the country as a senior. He evaluated a number of schools throughout his recruitment, with Georgia and Alabama being the front-runners, before committing to Auburn University in February 2016.

Brown had 11 tackles, a sack, and a fumble recovery as a freshman in 2016. He started all 12 games as a sophomore in 2017, recording 49 total tackles, 3.5 sacks, 8.5 tackles for a loss, and two forced fumbles. Brown was named second-team All-SEC as a junior after recording 48 tackles, 10.5 for a loss, and 4.5 sacks. He produced 55 tackles as a senior, including 12.5 tackles for loss, four sacks, two forced fumbles, and four pass breakups, garnering him All-American honours and SEC Defensive Player of the Year honours.

The Carolina Panthers selected Brown seventh overall in the 2020 NFL Draft. In May 2020, he signed a four-year rookie contract worth $23.621 million that is completely guaranteed. Brown has his first two career sacks on Aaron Rodgers in a 24–16 loss to the Green Bay Packers in Week 15 of the season. 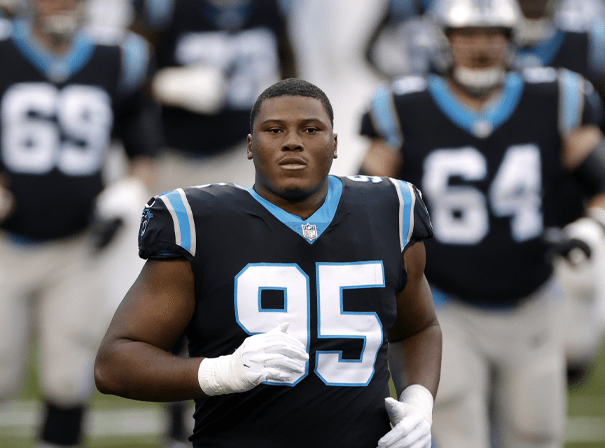