A legendary figure at Atlético Madrid, Diego Simeone is a world famous football manager and former player who personified the fighting spirit of Argentina. His achievements as both a formidable midfielder who covered every inch of the pitch with gritty determination and as an incredibly successful coach with a true passion for his club have cemented his status as a footballing icon. Also known as El Cholo, as a player he won the UEFA Cup with Inter Milan, domestic doubles with both Atlético Madrid and Lazio and was capped for Argentina over 100 times, appearing in three FIFA World Cups in 1994, 1998 and 2002. He also won a silver medal at the Summer Olympic games in 1996 and won the Copa América in both 1991 and 1993.

As a manager his biggest success has come with Atlético Madrid, winning the Copa del Rey, La Liga, two UEFA Super Cups, two UEFA Europa Leagues and guided the side to runner-up of the UEFA Champions League on two occasions.

Born in Buenos Aires, Argentina, Simeone was nicknamed Cholo by his youth coach Victorio Spinetto. The young player began his career at Vélez Sarsfield before moving to Italian club Pisa in 1990. He was sold to Sevilla in the Spanish La Liga and played two seasons before signing for Atlético Madrid where he became a member of the team which achieved the double of the Copa del Rey and Liga title in 1995-1996. He left for Inter Milan in 1997 and also played for Lazio, but later returned to Atlético Madrid in 2003, playing 165 matches for the side in total during his career and scoring 31 goals. He was unveiled as the new Atlético Madrid coach in 2011, and won the UEFA Europa League in his first season as manager. 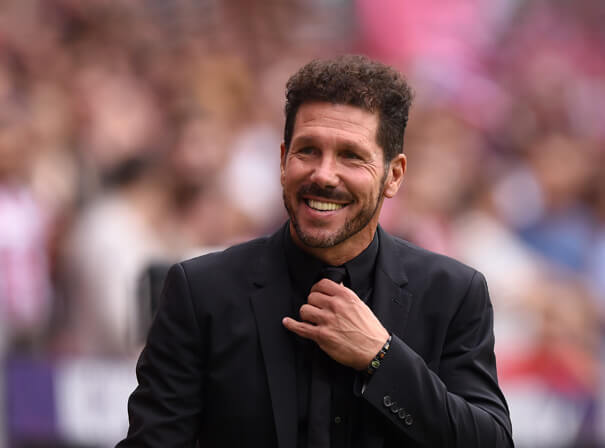