Professional ice hockey goaltender Elvis Merzļikins is famous for playing for National Hockey League side the Columbus Blue Jackets. The Latvian goalie previously made his mark playing for HC Lugano in Switzerland where he bagged the Jacques Plante Trophy for best goaltender in the National league on two occasions (2016 and 2018). Merzļikins has also represented his country at both junior and senior level at multiple international tournaments.

Born in Riga, Merzļikins played junior hockey with HC Lugano in Switzerland which enabled the young goaltender to play in the National League with a Swiss player license. He went on to be voted NL Youngster of the Year and NL Media Most Improved Player for the 2013-2014 season, and the following season the Latvian ace enjoyed a breakout year leading the league in saves. His impressive form was soon spotted by scouting services, and Merzļikins was selected by the Columbus Blue Jackets in the third round of the 2014 NHL Entry Draft. Merzļikins made his NHL debut against the Pittsburgh Penguins on 5th October 2019 and signed a two-year contract extension with the club on the 23rd April 2020. 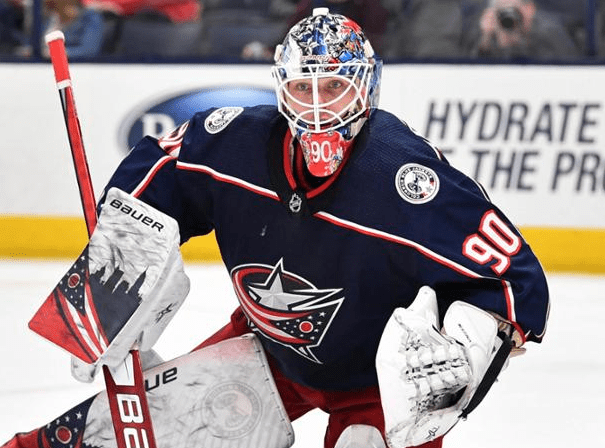