Chávez began his major league career with the Montreal Expos, where he played 309 games from 2002 to 2005. He played full-time for Expos in 2003 and 2004, where started in centre field and batted first in the lineup. In October 2004, Chávez recorded the final out in the history of the Expos during an 8 – 1 loss to the New York Mets. The following year, Chávez joined the Mets on a $500,000, one-year contract. Chavez’s performances, in particular his first-rate defensive skills, contributed to the Mets winning the National League East.

In Game 7 of the 2006 National League Championship Series, Chavez made a catch that would go down in Mets history. With the game tied at 1 – 1 at the top of the sixth inning, Arizona Cardinals third baseman Scott Rolen hit a pitch that seemed destined to be a home run, before Chavez leapt above the eight-foot-high left field wall to catch the ball with the tip of his glove. He then threw the ball back to second baseman José Valentín, setting up a double play that would end the inning. At the fifth annual This Year in Baseball Awards, Chavez’s catch was chosen as the top post-season moment, and a plaque outside the entrance gate of Citi Field, the Met’s ballpark, now honours the catch. Since retiring as a player, Chávez has begun a career in coaching and been on the staff of the Brooklyn Cyclones and the St. Lucie Mets. 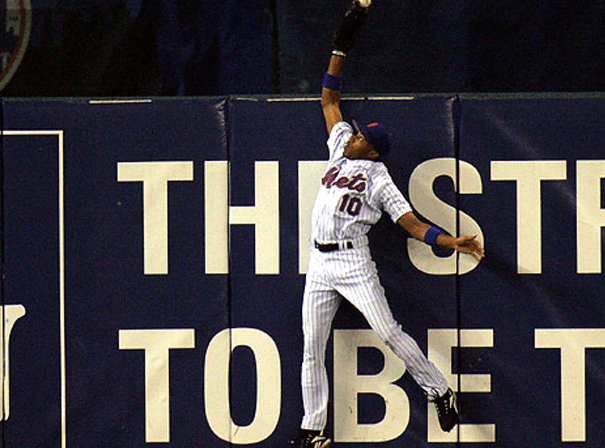