Erica Rhodes is an American stand-up comedian, actor, and writer who has built an enviable resume. She is perhaps most closely associated with the radio variety show Live from Here (formerly known as A Prairie Home Companion), having performed on and written for the show since the age of 10. Her wealth of film and TV credits include guest appearances on award-winning sitcoms such as New Girl, Modern Family,and Veep, and in documentary series 1000 Ways to Die. In 2019, she appeared on the first season of NBC’s comedy talent show Bring the Funny, making it to the semi-finals.

Rhodes’ stand-up career was in its ascendancy long before she appeared on Bring the Funny. She has performed to rave reviews at comedy festivals across the US including San Francisco Sketchfest (where she has sold out shows as co-host of talk/game show Stardumb!), Boston Comedy Festival, Blue Whale Comedy Festival, and Moontower Comedy Festival. She has also performed stand-up on television, with guest spots on Comedy Central’s @Midnight, Comedy Bang! Bang!, and Comedy Sketch TV Time OK?

From 2008, Rhodes played Sandy in web comedy Upstairs Girls and its spin-offs Downstairs Guys and Sandy’s Channel. Streamed on YouTube, the shows became immensely popular, racking up close to 250 million views between them. In 2011, for her work on the series, Rhodes was nominated for the Most Hilarious Leading Actress in a Web Series Award at the LA Comedy Awards. Two years later, she produced and starred in the short film Posey, which won awards at various festivals. In 2015, she was nominated for the Best Actress Award at the Los Angeles Short Film Festival for her part in The Platinum Plan. 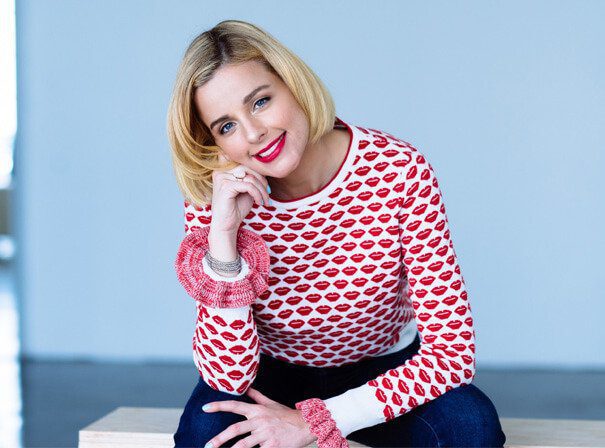