Erin Jackson made history in February 2022 when she became the first black woman ever to win an individual gold medal at the Winter Olympics. She achieved this by winning the Women’s 500-metre speed-skating event at the 2022 Games in Beijing — her second Winter Olympics. Before moving to ice speed-skating, she was also an established inline speed-skater, being named the US Olympic Committee’s Female Athlete of the Year in both 2012 and 2013 and winning a silver medal in the sport at the 2015 Pan American Games.

Jackson was born in September 1992 in Ocala, Florida — not exactly a state known for its affinity with winter sports! She first tried figure skating when she was eight years old and gradually established herself as a strong contender, eventually winning gold in the 500-metre inline speed-skating race at the 2009 Junior World Championships and gold in the same event at the 2014 Pan-American Championships. She is also an accomplished roller derby competitor.

In 2016, Jackson decided to begin the shift to speed-skating on ice and had only four months of competitive experience when she qualified for her first Winter Olympics in 2018. She didn’t make the podium then, and she almost didn’t qualify for Beijing 2022 after slipping over during a race in the US Trials. Thankfully, however, she made it and took the field by storm in the final, winning the 500-metre race by 0.08 seconds and becoming the first American woman to win that race in nearly 30 years, the first American woman to win an Olympic speed-skating gold for 20 years, and best of all, the first black woman to win a Winter Olympics individual gold in the tournament’s 98-year history. 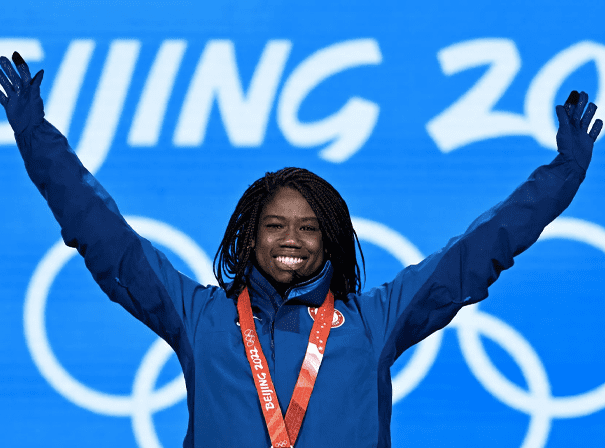