Daredevil Ernesto Gainza is one of the best aerial stunt performers in the discipline of base jumping, skydiving and wing suit flying. Specialising in the use of extreme sports to create awe-inspiring live displays, commercials, brand endorsements and stunts for film and television, he broke a world record when he jumped out of a plane with the world’s smallest parachute and has completed more than 8,000 skydives. With multiple certifications and three Guinness world records under his belt, Gainza prides himself on his ability to plan, envision and execute innovative stunts in a safe and professional manner, and has worked with some of the world’s biggest companies and brands including Hugo Boss, Tim Hortons, Jack & Jones, Shell International, DHL and Crocs.

Born in Valencia, Venezuela, the extreme athlete studied law at the Universidad Bicentenaria de Aragua in Maracay before moving to the UK in 2002 to obtain a second degree and to improve his English. The following year he made his first skydive and instantly became hooked, becoming a professional skydiver and founding the Flight Parachuting Demo Team in 2009 which performed at major air shows across Europe. Gainza was one of the top canopy piloting competitors in the world until 2011 when he retired from the competition scene.

In 2014 he drew worldwide attention when he landed the world’s smallest and fastest parachute in Dubai. An experienced RED camera operator, Gainza was the executive producer for the documentary film about his achievement called Down to Earth. The experienced daredevil is also the top choice of official tester for several of the world’s leading parachute manufacturers, and he continues to share his thrilling adventures across his popular social media accounts. 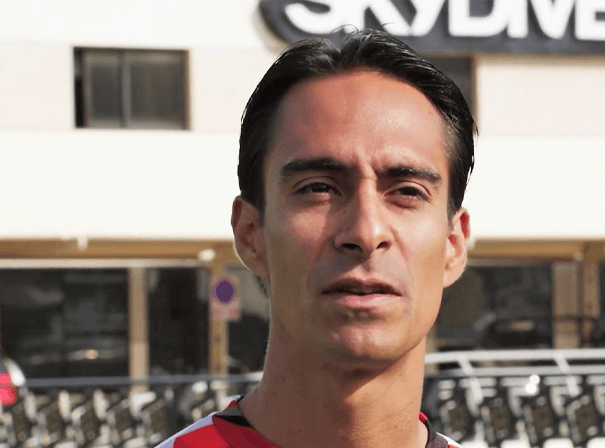