Evan Neal is a special kind of footballer. He’s so special that he is being projected as the number-one pick of the 2022 NFL Draft. The Alabama Crimson Tide offensive tackle called time on his college career at the end of his junior season in December 2021. He finished that season as a Consensus All-American with First Team All-SEC honours. Earlier that year, he was also part of the Crimson Tide team that won the CFP Championship game. He chose not to participate in the 2022 NFL Combine, preferring to hold off until Alabama’s Pro Day. It’s a risky decision, but one that has done his standing no harm, with this year’s premier-pickers, the Jacksonville Jaguars, looking to set to make Neal the first Crimson Tide player to become a first draft pick since Hall-of-Famer Harry Gilmer in 1948.

Neal, 74 years Gilmer’s junior, was born in Okeechobee, Florida, in September 2000. He played for the local high school’s football team before transferring to the prestigious IMG Academy in Bradenton. Here, he capitalised on his potential, becoming a five-star recruit and playing in the Under Armour All-American Game. He committed to play for Alabama and signed with them in early 2019.

Neal’s freshman season saw him play at left guard, but he switched to right tackle for his sophomore season. He ended that season by starting in the College Football Play-Off game, which the Crimson Tide smashed 52-24. In his junior year, he excelled, being voted a Consensus All-American at the end of the year and deciding it was time to take on the NFL. Now on the verge of making history, his timing seems to have been perfect. 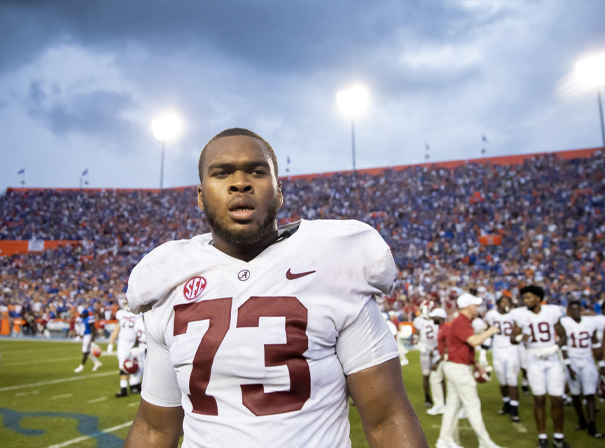