Famously known as a professional tennis player, Francoise Abanda first began her tennis career when she was just 7 years old. Abanda was inspired to begin training for tennis after her older sister, Elisabeth, who had started playing tennis two years prior. Since 2009, Abanda became a member of Tennis Canada’s National Training Centre in Montreal. Abanda reached the third round of the junior US Open in singles, in 2011. In the following year, Abanda was eliminated in the third round of the junior French Open in singles, and in quarterfinals in doubles. Abanda played and won her first professional match with a price of $25,000 ITF in Grandby in July 2012, defeating world number 331, Jennifer Elie. In 2012, Abanda won FB1 Pan American, which got her to reach the doubles semifinals at a $50,000 ITF in Saguenay. A week later from that, Abanda reached her second straight doubles semifinals, at the $50,000 ITF Challenger in Toronto. Abanda achieved a career high junior rank at number 4 on April 2013. In August 2013, Abanda reached the second round of the junior event of US Open. Then the following week, she was awarded a wildcard in the doubles main draw Challenge Bell with fellow Canadian, Carol Zhao. In January 2014, Abanda won her first professional singles title, winning against compatriot Heidi El Tabakh at the ITF $25,000, in Port St. Lucie. She qualified for the ITF 100 K in Midland, in February, however lost in the second round. In September 2014, Abanda reached her highest WTA doubles ranking of 197. However, Abanda’s highest WTA singles ranking of 111 took place on October 9, 2017. 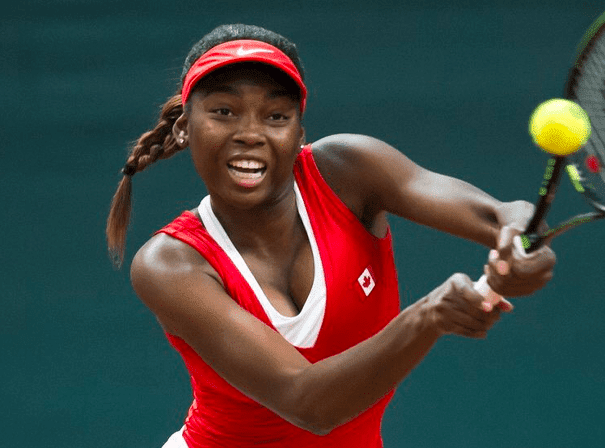