Two-time Olympic medallist Galen Rupp is one of the greatest long-distance runners of his generation. The American won a surprise 10,000m silver medal at the London Olympic Games in 2012, finishing behind training partner Mo Farah to become the first American man to win an Olympic medal in the event for 48 years. His second Olympic medal came at the Rio games when he clinched the bronze in the men’s marathon, and in 2017 he was victorious in the Chicago Marathon. In 2020 he won the US Olympic Marathon trials held in Atlanta to qualify for his fourth Olympic Games.

Born in Portland, Oregon in the USA, Rupp’s talent shone through from an early age. In 2004 he was named Track and Field News “High School Athlete of the Year” and delayed entering college so he could train with marathon legend and coach Alberto Salazar. In May 2005 he rose to prominence after breaking the U.S. junior 10,000m record, which still stands today. His collegiate career also saw Rupp earn a place at his first Olympics in 2008, and he went on the finish 13th at the Beijing Summer Olympics in 2008 with an American Olympic-record time.

Rupp turned professional after winning a place on the 2009 World Championship US team, and went on to finish 8th in the 10,000m at the championships. Rupp continued to impress, and in 2012 he climbed the podium after clinching an impressive silver medal at the London Olympic Games. He found Olympic success again four years later, this time in the marathon where he bagged the bronze medal with a time of 2:10:05.

Already qualified for the Tokyo Olympic Games, Rupp has set now his sights on Olympic gold once more. 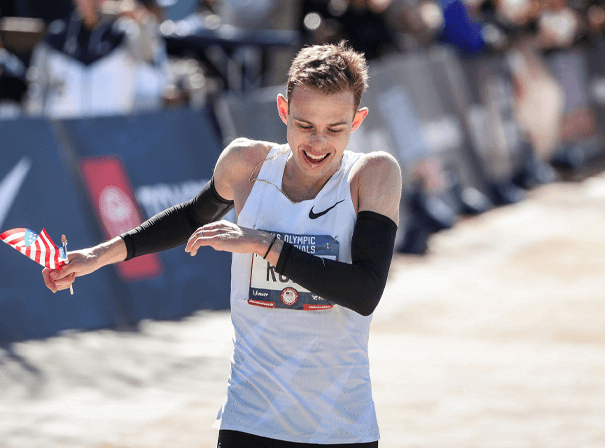