Considered to be one of the best English strikers of all time, Gary Lineker became the face of the England team during their World Cup 1986 campaign, steering the squad through difficult games and winning the coveted Golden Boot. He still holds England’s record for most goals scored during a World Cup, and after acting as the face of football on the BBC for over a decade, Lineker has cemented his status as one of the sport’s most impressive success stories.

His stellar career started at boyhood team Leicester City, where he quickly progressed into the senior side to become the First Division’s top goal-scorer in 1985. This prompted a move to bigger club Everton where he regularly celebrated hattricks and pushed the club into three FA Cup Finals. After an extraordinary performance in the ’86 World Cup Lineker was snapped up by world-class team Barcelona. Scoring 42 goals in 103 appearances. he became La Liga’s top-scoring British goal scorer and instrumental in a Copa del Rey win. A move to Tottenham Hotspur saw Lineker finally lift the FA Cup in 1991 before he racked up another 67 goals scored in only 105 appearances for the London club.

Internationally, Lineker was capped 80 times and scored 48 goals for England: he remains one of the only players never to have been shown a red or yellow card during a game. Regularly included in lists of the Greatest Players of All Time, Lineker was inducted into the English Football Hall of Fame in 2003. Now a successful media star, Lineker owns his own production company and is the main host of BBC’s flagship sports show Match of The Day. 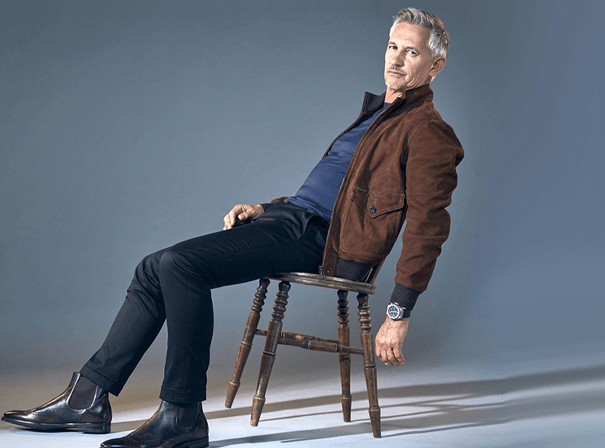