Genie Bouchard is a tennis player from Canada. She became the first Canadian-born player to represent Canada in a Grand Slam singles final at the 2014 Wimbledon Championships. She won the Wimbledon kids’ title in 2012 and went on to be crowned the Women’s Tennis Association’s Newcomer of the Year at the end of the 2013 WTA Tour. Bouchard also went to the semifinals of the Australian Open and the French Open in 2014. Finally, Bouchard won the WTA Most Improved Player award for the 2014 season and there she attained a career-high ranking of number five in women’s singles, making her the first Canadian tennis player to do so. Bouchard beat out Neymar, Steph Curry, and Usain Bolt for the top spot on SportsPro’s “World’s 50 Most Marketable Athletes 2015” list. Bouchard even competed in the 2016 Summer Olympics in Rio.

Bouchard plays a high-risk, aggressive style of tennis from the baseline, focusing on her strong groundstrokes. Her style allowed her to defeat many top 10 players and run deep into Grand Slams. Her strongest groundstroke is a two-handed backhand that routinely penetrates deep into the court and allows her to force opponents behind the baseline. Her forehand is known for her compact swing, which allows her to create a lot of force behind the ball. Bouchard has collaborated with a number of products including Coca-cola, Newblance, and Nike. She also endorses tennis and racquet brands like Babolat, Wilson, and Yonex. Follow her on Instagram @geniebouchard for a behind-the-scenes look into her life and training alongside her over 2 million fans. 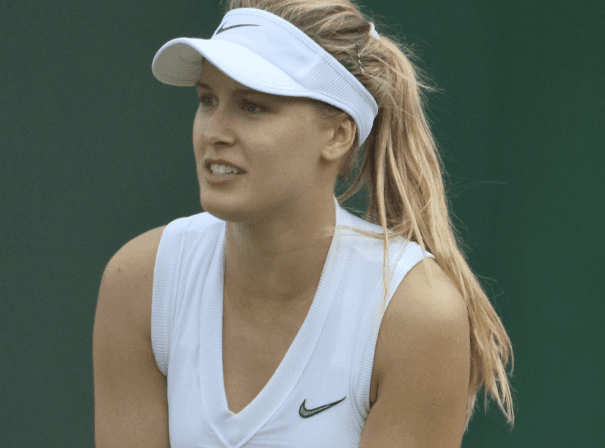