Named one of the “100 Greatest NHL players in history”, Grant Fuhr is a former ice hockey goaltender who won the Stanley Cup 5 times with Edmonton Oilers. The legendary player enjoyed a decade of stellar play for the club, where he became known for his laid back and easy going temperament, and the six-time All-Star also played for Calgary Flames, Buffalo Sabres and St. Louis Blues. A true trailblazer, he set several firsts for black hockey players in the NHL including the first to be inducted into the Hockey Hall of Fame in 2003 and the first to win the Stanley Cup.

Born and raised in Spruce Grove, Alberta , Fuhr first played for the Enoch Tomahawks before joining the Victoria Cougars of the Western Hockey League. In 1981 after two stellar seasons in Victoria, the talented goaltender was drafted eighth overall by the Edmonton Oilers in the National Hockey League (NHL) Entry Draft.

Fuhr first teamed up with Andy Moog followed by Bill Ranford to create one of history’s most formidable goaltending tandems, and from 1983-84 through ’87-88 won the Stanley Cup on four occasions in five seasons. He went on to play ten seasons for the Oilers, and his performances for the team meant he was often heralded as the best goaltender in the world at the time.
At international level he cemented his reputation further, representing Canada at the 1987 Canada Cup and winning a silver medal at the 1989 World Championships. Since retiring Fuhr has worked as a coach for the Phoenix Coyotes and the Calgary Flames, and released his biography Grant Fuhr: The Story of a Hockey Legend in 2015. 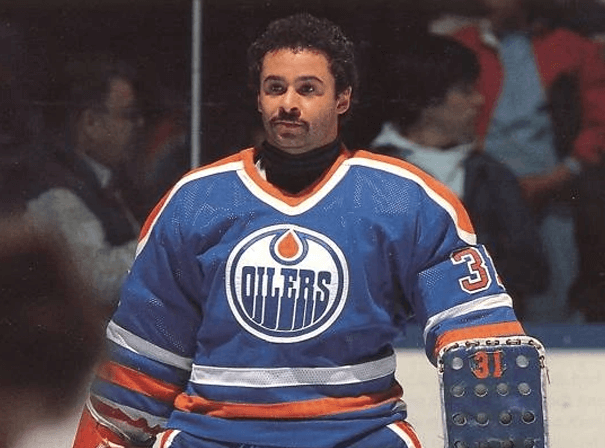