Gregory Allen Smith, also known by his ring name Gregory Iron, is an American professional wrestler who frequently competes in the Pro Wrestling Ohio, AAW, Chikara, Smash, and Alpha 1 wrestling promotions. Iron has cerebral palsy. He appeared on the first episode of Pro Wrestling Ohio on November 20, 2007, defeating Johnny Gargano. Iron is also the longtime tag team partner of Hobo Joe, in the “Homeless Handicapped Connection,” billed as mutually overcoming many obstacles to compete. In 2012, Iron and Zach Gowen would form the tag team the Handicapped Handguns, later changed to The Handicapped Heroes. In January 2013, the two defeated The Dead Wrestling Society to win the Prime Tag Team Championship. Iron and Gowen won the PWO Tag Team Championship for the first time, defeating Sex Appeal.

In April 2014, Iron became the first person in independent wrestling to win the independent World Heavyweight Championship after defeating the team of Bobby Beverly and Bobby Shields, with the help of Nickie Valentino. He has also appeared in a number of independent wrestling shows, such as “Impact” and “Lonely Star Wrestling”. Iron was the subject of a special report by Cleveland’s WOIO-TV Channel 19, entitled “An Iron Will”, which won an Emmy in June, 2012. He has been generally known as “The Best Disabled Wrestler in The World” since November 2012. Iron co-hosts the Iron-On Wrestling Podcast with fellow wrestler Aaron Bauer. 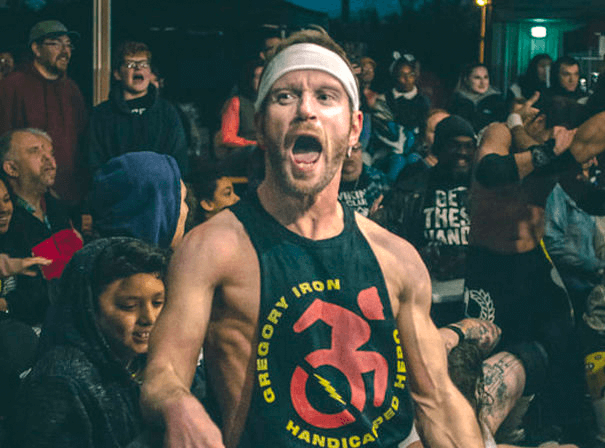