Elbert L. “Ickey” Woods is a former fullback in the National Football League who spent his whole career with the Cincinnati Bengals (1988–1991). He was a member of the UNLV football team in college. He is best known for his end-zone dance, the “Ickey Shuffle,” which he did every time he scored a touchdown. After an outstanding debut season in which he ranked second in the NFL with 15 rushing touchdowns, a series of injuries cut short his NFL career, and he was forced to retire after only four years.

The Cincinnati Bengals selected Woods in the second round (31st overall) of the 1988 NFL Draft. He was a breakout sensation as a rookie, rushing for 1,066 yards, 15 touchdowns, and an NFL-leading 5.3 yards per carry as the Bengals advanced to Super Bowl XXIII, as well as 228 yards and three touchdowns in the playoffs. Although his team was defeated by the San Francisco 49ers 20-16, he was the game’s best rusher with 79 yards.

Woods finished his career with 332 carries for 1,525 yards and 27 touchdowns, as well as 47 receptions for 397 yards. He held at least 30 Bengals franchise records as of the 2017 NFL off-season. Woods has been the owner/coach of the Cincinnati Sizzle of the full-contact Women’s Football Alliance for many years, and his ex-wife, Chandra Baldwin-Woods, was one of their players. He is the founder of the Ickey Woods Youth Foundation and the Jovante Woods Foundation, the latter named after their son who died at the age of 16 after an asthma attack. The organization supports asthma research and organ donation education. 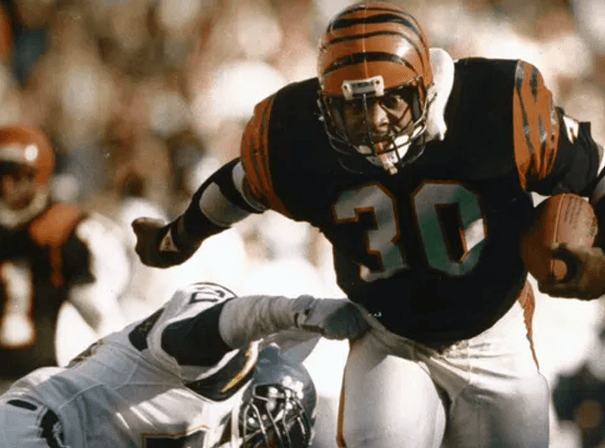