NFL running back Joshua Kelley is one of the Los Angeles Chargers’ most exciting up-and-coming players. Kelley was born in Inglewood, California, and quickly became noticed for his athletic prowess in high-school. As a senior he received first-team all-conference honours in the Golden League, as well as being named the running back of the year. Beginning his college football career at the University of California, Davis, Kelley quickly switched to the celebrated UCLA Bruins in 2017.

His 4 years at the college saw him become one of the team’s most successful running backs in history. In 2018, Kelley earnt a full scholarship to the university, and began one of his most successful seasons to date. By the end of the 2018 season, he had been named Bruins’ top offensive player and had helped the team win against rival team USC for the first time in four years. He also ended the season with the 10th highest single season total in the university’s history while also ranking ninth in the nation for his 113 rushing yards. He was consequently named Bruins’ most valuable player and received an honourable mention in the All-Pac-12 in 2019.

Destined for greatness, Kelley was then drafted for the Los Angeles Chargers in 2020. He is currently one of the team’s most exciting and dynamic young players. At only 23 years old, the football star is quickly becoming one of the NFL’s most promising young running backs. 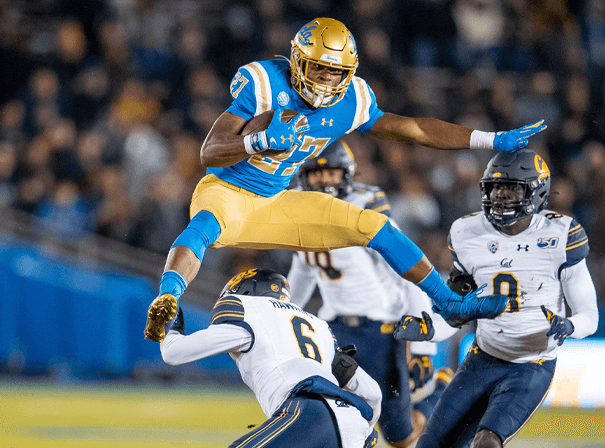