Japanese professional table tennis player Kasumi Ishikawa is the best female table tennis player in Japan—a left-handed shakehand holder who primarily uses speedy top-spins and loops in offensive play. She was nicknamed Ai-Chan II after fellow table tennis player Ai Fukuhara (whom she overtook in rankings and modeled her underspin after). She first came into the public eye when she defeated high school and university students much older than her in her first ever All Japan Table Tennis Championships. At just seventeen years old she won the national singles title in 2011.

She quickly rose through the world rankings and managed to secure a place in the 2012 London Olympics; she is the first Japanese competitor to have reached the Olympic semi-finals. Ishikawa and Fukuhara brought Japan to their first table tennis finals in the Olympics in three consecutive matches; however, they failed to beat China but got their first Silver medals. In 2016, she won Bronze with the Japanese Olympic team in Rio, and in January 2020 she was announced to be joining the women’s table tennis team with Ito Mima and Miu Hirano at the 2020 Olympics in Tokyo. In the singles events, she’s won first at the All Japan Championships, the World Tour Grand Finals and multiple World Tours, including the 2010 Morocco Open, 2014 Russian Open, and 2015 and 2017 Bulgaria Open. In the doubles events, she was a runner-up at the 2011 Pro Tour Grand Finals and a six-time Pro Tour winner at the Opens in Morocco (2009, 2010), Germany and Hungary (2010), Chile (2011) and Bulgaria (2017). In the mixed doubles events, she placed 1st at the World Championships in 2017 and 2019 and 2nd in 2015. It has been her dream to compete in the Olympics since primary school, and with two Olympics behind her, she’s sure to take home another medal at the 2020 Olympics. 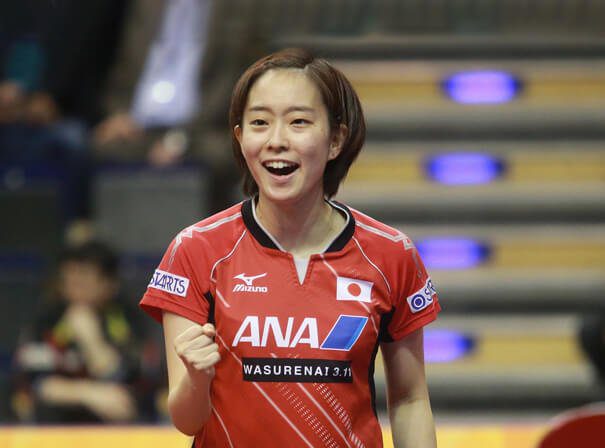