Despite never surfing in a professional competition, Laird Hamilton is one of the most iconic, innovative and influential surfers of all time. A born waterman, he is co-credited with inventing “tow-in” surfing — a style that allows surfers to catch even bigger waves — and has appeared in numerous films and documentaries about his beloved sport. Highly in demand as a motivational speaker and trainer, he is also co-founder of XPT Extreme Performance Training along with his wife, volleyball star Gabrielle Reece.

Born in San Francisco, Hamilton’s love of surfing came from his adoptive father, Bill, a board-maker and sometime-competitive surfer. Yet, despite his natural affinity with the board, Hamilton wasn’t interested in the world of professional surfing competitions. He saw something far more profound in his relationship with the waves. To him, it was — and still is — a lifestyle, a spirit that cannot be embodied in medals or titles. Instead, he made a living through modelling and occasional movie roles. Notably, during this period, he was Kevin Costner’s stunt-double in Waterworld, a dangerous role that almost cost him his life.

Tow-in surfing, perhaps Hamilton’s most well-known contribution to his passion, was developed in the early ‘90s and used watercraft to help surfers reach bigger waves than they ever could with a paddle alone. He has also been a keen exponent of kitesurfing, stand up paddle surfing, and foilboards. However, the defining moment of his surfing career so far came during the summer of 2000 when he was filmed riding a wave of near-mythical proportions in Tahiti. The footage has become a touchstone of the surfing world and established Hamilton, beyond all doubt, as the world’s greatest living surfer. 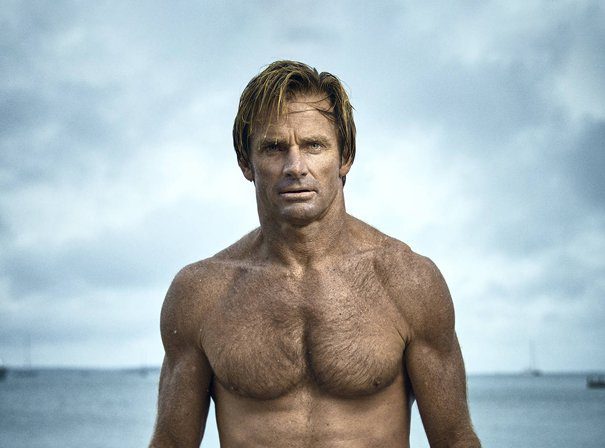