Lance Kobusch is an American star in Motorcross who competes internationally for the USA for which he is renowned. His nickname is ‘Lance Lightning Kobusch’ and he has many fans with 50.2k followers on Instagram. He is from New Florence, Missouri but feels that Texas is a second home – he spent a lot of time there as a child. He started bike racing with a KTM Mini-Adventure from the local motorcycle shop and rode out with friends from childhood such as Chase Sexton. He feels that he owes a lot to ‘Monster Energy Kawasaki Pro Circuit Team Green’ as he has been on Team Green since he was 8 years old. They have helped him with bikes and support and he appreciates he has had further support from many sponsors.

Kobusch became widely noticed when he competed at a local track in Austin, Texas on an 80 cc Kawasaki bike. He competed at the ‘Monster Energy Cup’ in the Supermini class. He was able to shred the competition with the whips that he could throw. At the age of 18 he won a big Motorcross championship in Dortmund Germany. He has moved on to advance to the full-sized bikes and more recently he was 22nd place in the Atlanta GP 2020. He is 69th of the AMA Supercross 250sx. 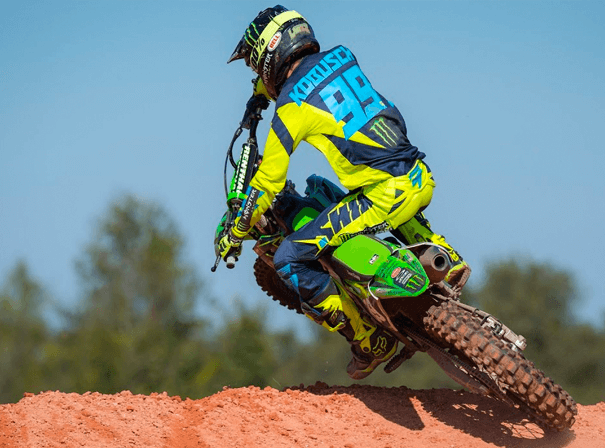