Former GP winner and MXoN overall winner Max Anstie is a professional Motocross World Championship racer. He is a former Grand Prix winner in the MX2 class, an individual winner at Motocross of Nations and has raced across the world. Likeable and always professional, the award-winning Anstie currently heads the official US Suzuki motocross and supercross team, joined by Brandon Hartranft and part-time rapper Adam Enticknap, as the Twisted Tea/H.E.P Motorsports squad.

The son of former rider Marvyn Anstie, Max Anstie was born in Winchester and started riding motorbikes at a young age. He debuted as a racer at the Handlebars 65 and 85 CC, and at 17 he made his Grand Prix debut in 2010 in the USA with Yamaha. He secured his first GP win in 2014 in Belgium, again with Yamaha. His next victories were in 2015, in Latvia, Belgium and Lombardia, Italy, this time with Kawasaki. Belgium proved fruitful yet again the following year, quickly followed by victory in Switzerland, this time both with Huqvarna. With a successful and solid career behind him, Anstie now rides for Suzuki’s premier 450 class race team in the United States.

Anstie regularly connects with his huge fanbase and dedicated followers via Facebook, Instagram and Twitter. He is also available for that high octane personal shout-out via the Cameo platform. 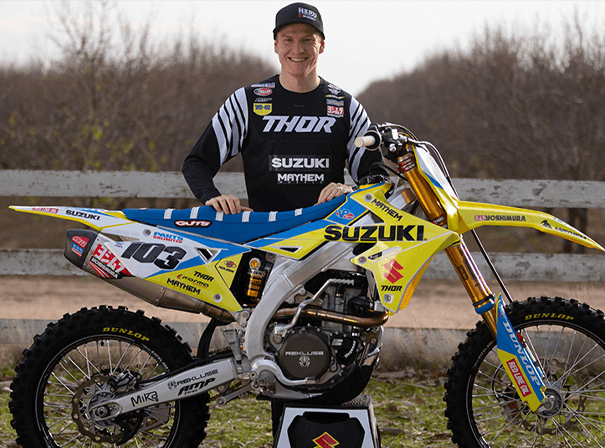