The powerful athlete Myles Amine is a freestyle wrestler, who competes in the 86kg weight category. He is an Olympic Bronze medalist, a European Champion, and a 5x NCAA All-American. He also won Gold at the 2022 Mediterranean Games.

Born and raised in Michigan, Amine began wrestling at a young age. He attended the University of Michigan, where he wrestled for the Michigan Wolverines. He was a regular on the podium, claiming Bronze medals at the Big Ten Championships in 2017, and then consecutive Silvers in 2018 and 2019 in the 174lb weight category. He then won Gold in 2021 in the 197lb event, and then claimed Gold again in 2022 this time in the 184lb event. He also competed in the NCAA Division I Wrestling Championships, winning Bronze in 2018 and 2019 (in 174lb) and in 2021 (in 197lb). He went one better in 2022 claiming Silver in the 184lb event.

On the international stage, Amine represents San Marino due to his maternal great-grandfather being a citizen. He competes in the 86kg weight category, and has won a Bronze medal at the 2020 Tokyo Olympics. He is also a 3x European Championships medalist, which includes winning the Gold in 2022, and a Bronze medalist from the European Games in 2019. He also picked up a Gold at the 2022 Mediterranean Games. 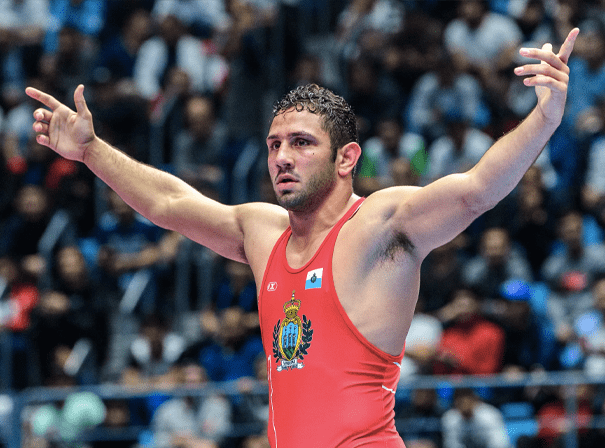