Multiple world-title winning Olympic champion Oscar de laHoya needs no introduction. One of the greatest boxers of all time, de la Hoyahas countless titles in a career that’s brought him worldwide recognition.Renowned for bringing the sport of boxing to new heights, de la Hoya’s name issynonymous with the sport.

Nicknamed the ‘Golden Boy’ of Boxing when representing theUnited States in the 1992 Summer Olympics, recent high-school graduate de laHoya stunned the world by winning the gold medal in the lightweight division.Named as The Ring Magazine’s Fighter of the Year only three years later, heswiftly became the top pay-per-view earner before being surpassed by FloydMayweather Jr.

Since retiring from professional boxing, de la Hoya has usedhis knowledge and expertise to found his own promotions company, Golden BoyPromotions, and recently begun to promote MMA matches with fighters such asChuck Lidell and Tito Ortiz. Aside from his fighting enterprises, he hasreleased a Latin-pop album on EMI International, co-written alongside the likesof Diane Warren and the Bee Gees, which picked up a Grammy nomination in 2000.A regular fixture on American television, the boxer can be seen in severalcommercials and has even visited American troops abroad, frequently making appearancesat boxing clinics and popular meet-and-greet events. 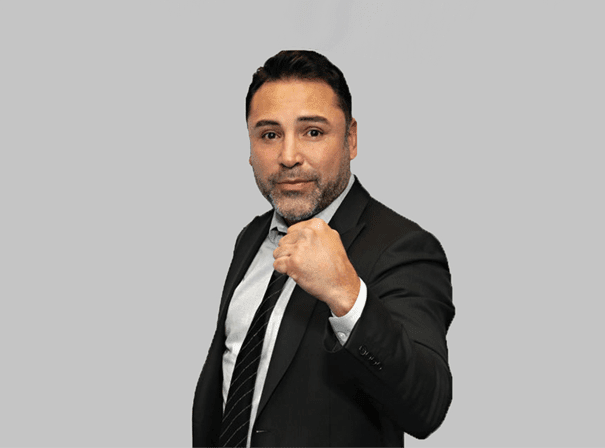