Owen and Lewis Harrison – also known as The Harrison Twins or The Shredded Twins – are globally famous fitness models and in-demand personal trainers. With 1.8 million Instagram followers between the pair, the bodybuilding twins have taken the fitness world by storm. The brothers have identical vital statistics – 18 inch arms, 32 inch waists and 44 inch chests – thanks to matching their exercise regimes and diets. The twins have now appeared in countless fitness magazines and newspapers including The Daily Mail, and are ambassadors for several brands including Boohooman and Gorilla Wear USA.

Born in Cumbria, the brothers grew up in Leeds, Yorkshire and were constantly active and involved in sports. The pair began working out at the gym together when they were 15 years old and both signed to Bolton Wanderers football club a year later. For a short while their career paths diverged, with Lewis becoming a personal trainer and Owen joining the Royal Marines. Four years later, Owen returned and decided to join his brother on his personal training journey.

Since then the Harrison Twins have sculpted almost identical physiques through training hard in the gym and have developed their personal training programs. They also got their big break when a photographer introduced the twins to fitness modelling and some of the most influential people in the fitness industry. Since then their careers have been on an unstoppable rise, building their world-leading brand that continues to grow. 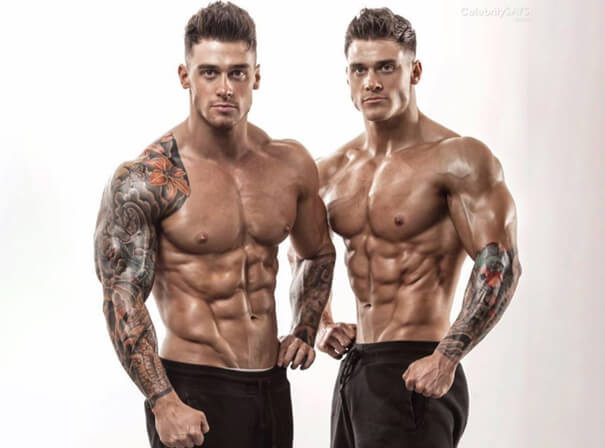