Paul Scholes is a former professional Soccerer and coach who spent his whole career at Manchester United. He’s won more Premier League titles than any other English player, having taken home the trophy 11 times, as well as winning the Champions League twice. Nurtured under the careful eye of Sir Alex Ferguson as part of the Manchester United youth academy, Scholes made his professional debut in 1994.

He rose to fame in the midnineties during a golden period for the club, becoming known for his skill in dictating play from midﬁeld and impressive long-range goal scoring ability. He went on to play a key role in United’s 1999 treble win, as well as playing for his country in two World Cups.

He’s received high praise from fellow players, managers and pundits alike for his technical ability and ability to stay in control of play. Despite leaving the game in 2011, Scholes brieﬂy came out of retirement the following year during United’s injury crisis, playing the 2012-13 season before ﬁnally retiring again in 2013. During this time he made his 700th appearance for the club, and scored in his 19th consecutive Premier League season.

Scholes went on to become a TV pundit for BT Sport, and a regular columnist for The Independent. He has coached Oldham Athletic, as well as being co-owner of Salford City. He has also bravely spoken out about his youngest sons’ autism and how it affects their family life, in the hopes of raising awareness. 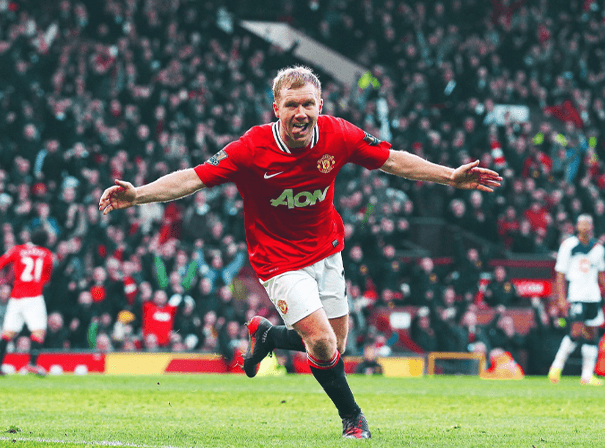