Swedish freestyle skier Sandra Naeslund is a World Championships title-winner, a two-time Olympian, and an overall FIS World Cup winner. She is widely regarded as one of the world’s best ski cross competitors, and one of the most successful women’s freestyle skiers to come from Sweden.

During her early career, Naeslund competed in alpine skiing as part of slalom and giant slalom events, as well as building her experience in ski cross competitions. Her particular strength in the latter was soon clear, and she was named Swedish National Champion in 2013. Naeslund ascended her first podium at the World Cup the following year, when she claimed second place in Val Thorens, and she has since racked up over three dozen podiums on the circuit, including 15 victories at the likes of Idre, Innichen, Nakiska and Sunny Valley. She has been named both ski cross and overall World Cup No. 1, and has enjoyed particular success at the Cross Alps Tour, winning this leg of the circuit for three consecutive years.

Naeslund first competed at the Winter Olympics in Sochi in 2014, where she finished fifth in the ski cross despite being just 17 years old. Four years later in Pyeongchang, she would improve her position to finish fourth, reaching the Big Final for the first time and narrowly missing out on an Olympic medal. Meanwhile, at the World Championships, Naesland captured the world’s attention in 2017, picking up the gold medal in Sierra Nevada and becoming the first Swede to hold the ski cross title. 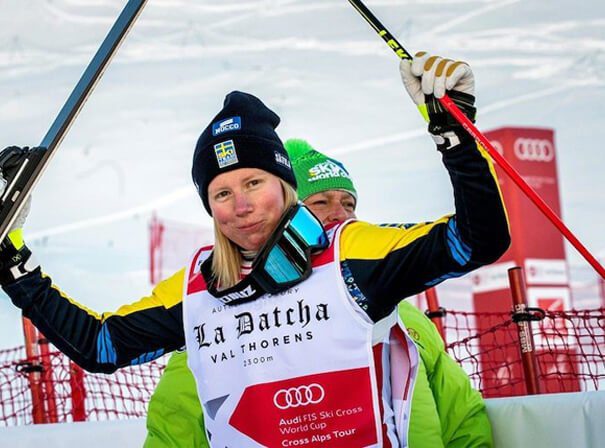