Yves Rossy Jetman is a Swiss military-trained pilot and aviation enthusiast, who is best known as the creator of experimental jet packs, and becoming the first person in the world to fly by attaching jet engines to himself, carried by a single wing, earning him the name Jetman. Rossy has appeared in the media on several occasions, including Stan Lee’s Superhumans and BBC’s Top Gear.

Born in Switzerland, Rossy served as a trained fighter pilot in the Swiss Air Force, during which time he flew many aircrafts including the Mirage II fighter plane, the Hunter and the Venom, one of England’s oldest fighter jets. Rossy also piloted for Swissair and for International Air Lines later in his career.

Upon retiring from the Air Force, Rossy wanted to embark on an adventure unlike others and he began his jetman venture. Rossy built a wingsuit invention that included a backpack and simple carbon-fiber wings which were powered by Jetcat P400 jet engines. In 2006, Rossy successfully flew a short distance with the contraption and in 2008 he made a journey across the Alps Mountain Range in flight. Remarkably in 2011, Rossy flew above the Grand Canyon in Arizona and his creation was classified as an aircraft. In 2015, Rossy and Vinve Reffet flew with an Emirates Airbus A380 at 4000 feet over Dubai, arguably Rossy’s most spectacular demonstration to date. 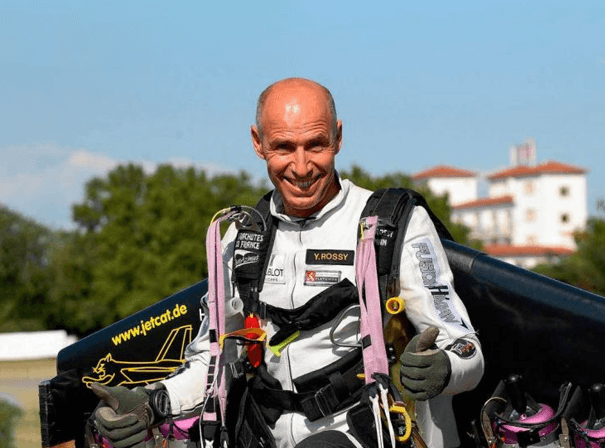