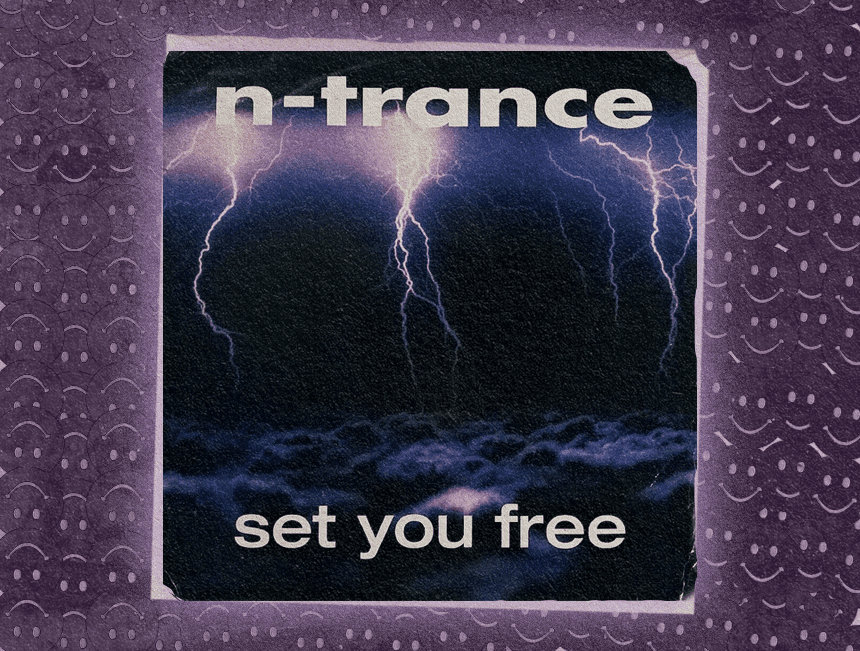 Rolling thunder hits your ear drums. It’s not a storm coming, but the start of N-Trance’s “Set You Free.” This classic rave track defined the peak of British rave culture in the mid-90s.

The story behind the song spans from its inception to decades after as it continued to influence the rave community around the world. An enduring classic, it remains as influential, popular and beloved as ever.

In 1990, Kevin O’Toole and Dale Longworth formed N-Trance after meeting at The Oldham College, where they both studied sound engineering. The duo started producing in their college’s free recording studio before moving on to Revolution Studios, where they produced “Set You Free.” The group recruited fellow college student Kelly Llorenna for vocals. Remarkably, she was only 16 at the time. Although the song shot to No 2 on the UK charts and was certified Platinum after selling 600,000 copies, “Set You Free” wasn’t immediately popular. In 1992 when the song was first released, only 500 copies of the vinyl were available. It wasn’t until a 1995 re-release that it finally reached mainstream success.

Although the lyrics only took 20 minutes to write, they came straight from O’Toole’s memory. A night out at the iconic Haçienda Manchester nightclub inspired the song. “The songs created a diary of what was happening at the time,” O’Toole said. He recalls that a woman walked up to him and hugged him so hard he felt her heartbeat through her shirt – inadvertently inspiring the opening lyrics: “When I hold you baby, feel your heartbeat close to me.”

“When I hold you baby, feel your heartbeat close to me.”

This classic rave track starts with the sounds of rain, a sign to hunker down and get ready to go through a storm of emotions. Llorena’s vocals are spaced between electronic piano chords and heart-rate-raising electronic elements, creating a sonic balancing act: the emotive vocals and the synthetic piano counteract each other to create a memorable musical collage. The words “wanna stay in your arms forever; only love can set you free” wash over the listener, but there’s not much time to get emotional. The BPM picks up right away and turns melancholy into euphoria, demanding any listener to get up and dance.

This sensational tune affected not only the electronic music community but the music industry too. At the time of its release, the group’s record label, All Around the World, owned Clubland. The UK dance brand’s compilation albums grew massively in popularity thanks to “Set You Free.” Clubland went on to launch its own digital TV channel and arena tour, and the compilation album is still going today, having released 28 volumes and counting. N-Trance and “Set You Free” played a large part in putting Clubland on the radar.

“When we used to go to the Haçienda, the song you remembered on the way home was always the last one played, and we wanted to create that.”

Arrivingat the peak of Britain’s rave scene, “Set You Free” tapped into the part of raveculture that some made fun of or wanted to avoid. Flashing lights, euphoric connectionsand sweat-inducing dancing wasn’t very much approved by the purists who tendedtowards music that was more lowkey and underground. Though they could beaccused of being cheesy, N-Trance were simply fearless in their pursuit ofmusical euphoria and simple, unpretentious fun. In the beginning, the song evensaw underground attention, but O’Toole still wanted “Set You Free” to be a mainstreamhit. “When we used to go to the Haçienda, the song you remembered on the wayhome was always the last one played, and we wanted to create that.”

Today,dance music is as popular as ever. It’s now a completely different monstercompared to the state of the genre during the time of “Set You Free.” Currently,electronic music is a 5-billion-dollar industry worldwide. “Set You Free” has adirect lineage to what we see today. The song helped stretch electronic musiceven more into the mainstream with its entrance into charts across the worldand involvement in Clubland. These compilation albums made electronic musiceasily digestible for the public. Finding the right song in a sea of singlesand demos is time-consuming and off-putting for someone new to the genre but releasingentire album of straight-up hits helped bring rave to the masses and popularizedance music across the globe.

“Set You Free” is a snapshot in time: a time full of blinding strobe lights, feet shuffling, bodies moving and people raising their hands in the air. As a testament to its enduring popularity, the song was re-released successfully in 2001. YouTube commenters still joke about who is still listening to the track over two decades later. Nostalgic listeners might argue that the song can never recapture the irreplaceable vibe of the early UK rave scene, but judging from the fact that “Set You Free” is still being played, mixed, remixed and talked about more than two decades after its release, it’s clear N-Trance still has the power to set listeners free.

These ’90s legends are set to bring the sounds of classic rave and Eurodance to Kent’s Revival in the Park this September….