Watch the Throne: Hip-hop’s Competition to Produce the Craziest Concert 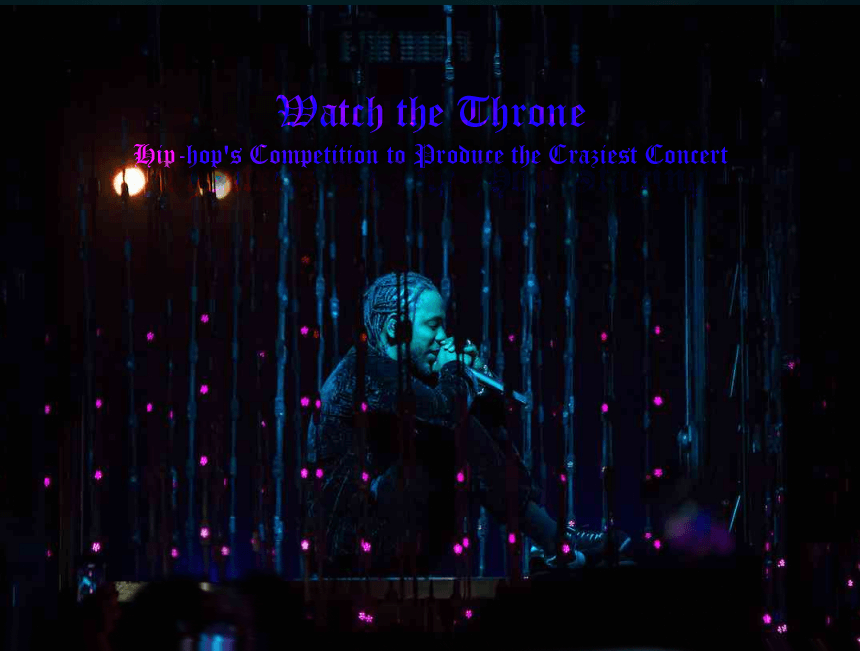 As technology is progressing, the live performances of hip-hop artists are growing in magnitude and theatricality.

The beloved genre, built on the streets of New York, now features extravagant elements of production and staging that have become as much a part of the show as the artists themselves: monumental LED displays, floating platforms, basketball courts, and even roller coasters.

Hip-hop artists from Kanye West to Travis Scott have utilized the most advanced technology in their recent tour sets, which are locked in continual competition to impress fans – and ultimately, to sell tickets.

During the 2011 Watch The Throne Tour, Kanye West and Jay-Z did not play when it came to their set design. As seen in the above photo, the pair constructed towering cubes to use as separate stages, paneled with high-resolution LED screens and covered with striking images, including the illusion that they were standing above shark tanks. The set also included a laser light show that was visible above the duo as they performed hits such as “Otis” in front of sold-out arena crowds.

Kanye West is one of the first hip-hopartists to really push the envelope on staging and creative performance setsthat double as works of art. Glimpses of each of West’s tours are delivered inthe clip above. The development from each tour is clear, as West went from thestatic Glow In The Dark (2008) set with its planetarium and neon paints, to his2016 Saint Pablo tour, featuring a floating mechanical platform draped withlights, creating the illusion that he was performing from a space shuttle abovehis fans. West is constantly competing with himself and others to produce themost spectacular hip-hop sets in the world, and as technology advances, he willcontinue to push the limits of the traditional stage and performance.

Drake has followed in Kanye West’s footsteps, likely after noting the success of the extravagantly theatric sets described above. In 2013’s Would You Like A Tour? performances Drake utilized a creative circular walkway for a stage lined with lights, finished with a symmetrical ring hanging above the stage. The 2017 Boy Meets World Tour saw Drake hang a massive spherical structure reminiscent of the moon above the stage, brightly lit and changing colour. On his most recent tour, Aubrey and The Three Migos, Drake utilized a neon LED-lined basketball court and would call upon fans mid-show to hit a half-court shot for a $25,000 cash prize.

The court/stage was lined with transparent curtains which acted as a screen for visuals from a projector, giving the illusion that Drake was performing from inside a glass box. The display on the basketball court hosted changing images in a similar fashion to the Watch The Throne Tour set LED display. From these examples it’s clear that Drake has continued the trend towards inventive staging with new and exciting technologies.

As the sole opener for Kanye West’s Yeezus Tour, Kendrick Lamar was exposed first-hand to the extreme preparation and production that was necessary for Ye’s sets. During the Yeezus tour, multiple actors performed on stage with West, making each song seem as if it were a piece from a musical. Lamar was seemingly influenced by this, bringing martial artists on stage while he performed: kicking, punching, and doing acrobatics as he rapped on his 2017 DAMN Tour.

At one point, Lamar moved to the middle of the floor and performed atop a structure covered in lights, reminiscent of a cage or jail cell. A giant display screen was erected behind Lamar, with a striking laser light show stretching across the stage and columns of fire intermittently shooting upward. Kendrick is another hip-hop artist responsible for pushing the boundaries of inventive technology and production in live performance.

Travis Scott opened for Kendrick Lamar on his DAMN Tour, and despite his inferior role, no effort was wasted on the production: Scott memorably performed to fans from atop a mechanical floating bird. When embarking on his own 2018 ASTROWORLD Tour, Scott decided to take his set to the next level, perhaps surpassing any previous efforts by a contemporary hip-hop artist.

The centre-piece of the set was a working roller coaster that traversed two separate stages, complete with a circular loop-the-loop, shrouded in fire, on one side. One of the most elaborate and visionary set designs in modern performance, this incredible production led Scott’s tour to sell out at every stop. Scott has set the bar high for his contemporaries, and it’s now up to them to produce something even more impressive – we can’t wait to see what’s in store.

Check out our extensive roster of live acts to book some of the biggest names in American hip-hop.

CHECK OUT THE ROSTER