A2 is a British rapper, songwriter and producer breaking barriers and shattering conventions within contemporary music. Turning the scene on its head with his inimitable blend of hip-hop, afrobeat, electronica and RnB, he’s been compared to likeminded innovators Octavian and Yxng Bane (both of whom he linked up with on the scene-stealing 2018 track “Flair”) while working with 6LACK and earning co-signs from Rihanna and Drake, who regularly airs the rapper’s tracks on OVO Sound Radio.

Hailing from the same London borough as Stormzy, Section Boyz and Krept & Konan, A2 started out putting together grime beats in his bedroom, an experience which he says informed the agility and flair of his current style. He’s now spent close to a decade quietly refining a sound that’s moved beyond the aggression and swagger of grime into a sensitive collage of RnB, hip-hop, afrobeats, trap and electronica, pairing shadowy, emotive instrumentals with lyrics that Crack Magazine described as “tales of lust, love and Hennesy-fuelled fallouts”.

A2’s discography spans six years, with a wealth of freestyles, EPs and remixes populating his SoundCloud page. His official releases have been more sparse, with 2017 seeing the release of two polar opposite EPs, RED and BLUE, followed in 2018 by Purple, a release that featured contributions from Octavian, Suspect and Yxng Bane. This enigmatic artist’s latest project, the 11-track mixtape All Spill, made waves in summer 2019 with next-level production and pinpoint flows that confirm his status as one of British music’s most promising talents. 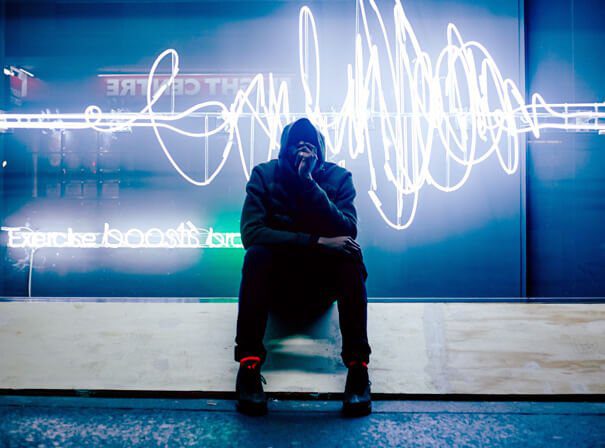