Known across the world as the ‘Piano Man’, singer-songwriter Billy Joel is one of the best-selling recording artists of all time. He has been recognised with an incredible 23 Grammy Award nominations, including five wins, and has been inducted into the Songwriters Hall of Fame and the Rock and Roll Hall of Fame. Many of his songs have become classics, receiving perennial radio play and inspiring dozens of covers. After brief stints in bands The Hassles and Attila, Joel launched his solo career in 1971 with debut studio album Cold Spring Harbor. The following year, he was spotted by Columbia Records, with whom he released the follow-up Piano Man, which was to mark his breakthrough and earn him his popular moniker.

In total, Joel has released 13 studio albums to date, as well as a host of live records, compilations and video albums. The majority of his studio albums have been certified multiple times platinum in the US, and both The Stranger and Greatest Hits – Volume I & II have received rare diamond certification marking 10 million sales. Joel has recorded dozens of charting singles, including three US Billboard Hot 100 No. 1s, and is known for hits including Only the Good Die Young, She’s Always a Woman, Uptown Girl and The Longest Time.

Joel has toured and performed extensively, has played many of the world’s most notable stadiums and arenas, and between 1994 and 2010 he toured extensively alongside Elton John on a series of sell-out Face to Face tours. He is the first artist to be twice-asked to perform the national anthem at the Super Bowl, is the only artist to have played at both the Yankee and Shea Stadiums, and holds the record for the most shows by a single artist at New York’s Madison Square Garden. 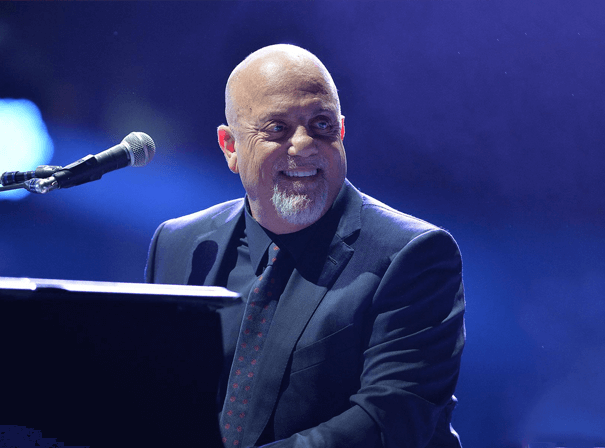