The boundary pushing London based rapper, producer and director CASISDEAD has been long hailed as one of the UK’s most innovative and experimental rappers. Working with anything from grime and drum & bass to hip-hop and soul, the mask-wearing influential figure has brought his talent to the London scene ever since 2005.

Then under the name of Castro Saint, he released the tracks “Adolescence”, “C from T” and “Drugs” – all highly influenced by his experiences growing up. In 2007 he took on major business ventures, returning as CASISDEAD in 2012. Now always wearing a skull mask in public and accompanied by is DEAD TEAM crew, he released singles “T.R.O.N.” and “Leon Best” in the following years.

In 2013 he released the now famous mixtape The Number 23, including the earlier singles. Praised as one of the UK’s top 3 albums, it included hits such as “All Hallows” with 4.2 million streams, “Drugs” with 2.5 million and “City Slicker” with 1.2 million. His synth-heavy EP Commercial 2 was then released in 2015, followed by hit singles in 2016 such as “Sion” and “Before This” as well as high-profile collaborations with Giggs and Tricky. More recently, he released the single “Pat Earrings”, becoming one of his most popular songs yet with 7.8 million streams and 3.7 million views.

Directing many of his music videos in his characteristic innovative and highly creative style, CASISDEAD has continued his enigmatic, albeit consistently boundary pushing, status right up until now, becoming one of the UK’s most important hip-hop figures. 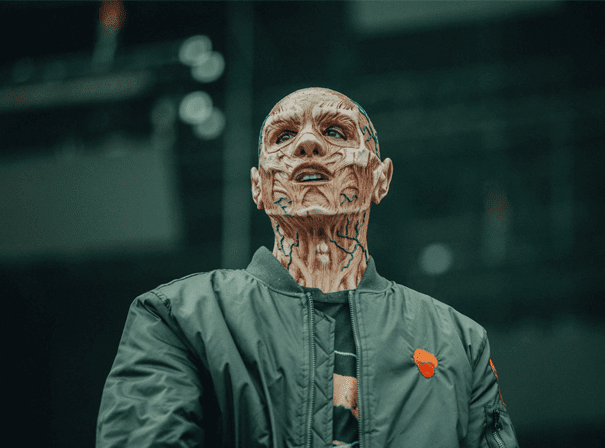