Fliptrix has been rhyming almost since he could string a sentence together. His impact on the UK hip-hop scene can’t be overstated: through his raw lyricism, relentless ambition and unparalleled creative vision, he’s made an indelible impression on the genre. The London-born, Brighton-based lyricist works as a solo artist, as one-quarter of acclaimed outfit The Four Owls, and as managing director of High Focus Records. As you can probably guess, he’s a busy man.
Fliptrix’s first LP dropped as the UKHH scene entered a period of renaissance – the first upturn since the golden days of ’00 – ’01. This resurgence has been growing stronger every year since ‘Force Fed Imagery’ saw the young lyricist break into the scene back in ’07. The artist can claim significant responsibility for the evolution of the genre and subsequently, the way in which the clubs, bars and hangouts, skate parks and record crates, iPods and airwaves sound as a result, both in the UK and across the globe. His career so far has been an unexpected journey that has taken him to every corner of the globe as a performer and seen him launch and champion the careers of the countless artists that have shared in the High Focus movement from the very beginning.
In 2011, Fliptrix teamed up with fellow UKHH royalty Leaf Dog, Verb T and BVA to form The Four Owls. Their debut LP ‘Nature’s Greatest Mystery’ captured the imagination of the tight-knit UK scene, catapulting their unique brand of boisterous boom-bap across Europe and beyond. Their second outing ‘Natural Order’, featuring the hit single ‘Think Twice’ (produced by hip-hop legend DJ Premier) flew straight to #1 in the iTunes chart, preserving the legacy of the group within the annals of rap history. The group’s inimitable blend of masked mystery and timeless boom-bap has captured the hearts and minds of hip-hop heads the world over.
Perhaps the rapper’s most sizeable achievement to date is the formation of High Focus Records in 2010. Releasing music from visionaries across the UKHH landscape, their spectacular roster includes Dirty Dike, Verb T, Leafdog, Fliptrix, Jam Baxter, Dabbla, Illinformed, Ed Scissor, Ocean Wisdom, Strange U and the chart-topping vocalist Rag ‘N’ Bone Man. Nominated for Best Small Label at the 2015 AIM awards, HFTV has clocked over 61,000,000 views on their YouTube channel and with over 50 releases under their belt, they’re showing no signs of slowing down. Fliptrix has organically grown and developed the label with no financial backing and no help from business mentors or major-label umbrellas – it’s simply a result of hard work, belief and dedication.
His latest release, the lyrical opus ‘Inexhale’, expands the hip-hop lexicon by exploring a refined sound that demonstrates the true extent of the rapper’s vision. With stadium-sized ambitions and the raw talent to back them up, Fliptrix is determined to continue the renaissance that he helped to spark back in 2007. 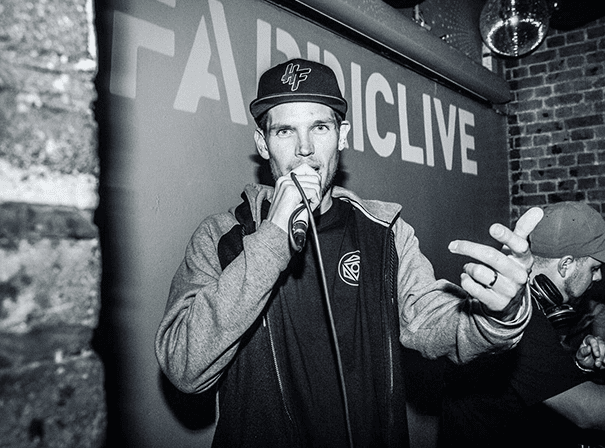