With her numerous hits and years of success, singer-songwriter and performer, HyunA has claimed her place at the K-Pop top. More than a decade ago, she broke out into the South Korean music scene as a rapper for the girl group Wonder Girls. Two years later, she joined 4Minute, a girl group that went on to become extremely popular in South Korea.

Focusing on a “performance-oriented music” style as she described it, HyunA started on a solo career. “Change,” her debut single, was an instant success charting at number 2 on the South Korea chart. Her title track from her hit EP, “Bubble Pop!” reached widespread recognition. It sold more than 3 million digital copies and ranked number 9 on SPIN’s “20 Best Songs of 2011” list. The song’s music video made HyunA the first female K-Pop solo artist to reach 100 million views on a single music video on YouTube. The following year, she appeared in Psy’s viral music video for “Gangnam Style,” which has over 3 billion views. By the early 2010’s, HyunA had taken the world by storm.

She performed at SXSW’s K-Pop Night Out in Austin, Texas in 2014, further establishing her as a global talent. That same year, her single “Red” was listed as number 5 on Rolling Stone’s best music videos ¬¬¬– making it clear HyunA was a performance powerhouse not only in live but through her digital brand as well. Her North American fanbase has continued to grow in strength and numbers. In 2017, HyunA embarked on a meet-and-greet tour in 10 North American cities. HyunA keeps fans across the globe up to date with her YouTube channel, which has close to a million subscribers. With such a strong online presence and successful K-Pop career, it’s no wonder her followers have created so much hype around both her previous and upcoming releases. 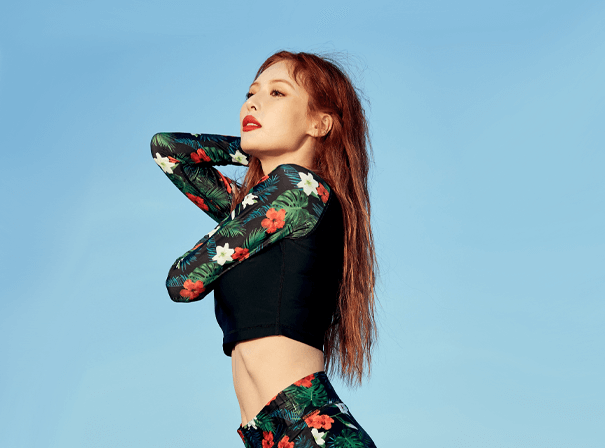