With over 3 million social media fans and followers, Andrew Henderson can claim to be one of the world’s most popular freestyle footballers as well as one of the most successful. He has been named World Champion Freestyle Footballer three times, UK Champion an incredible five times, and can boast an amazing list of achievements: performing at the 2012 Olympics and 2014 World Cup, performing at the UK’s biggest sporting venues, including Wembley and Old Trafford, and appearing alongside the world-beating likes of David Beckham, Lionel Messi, and Paul Pogba. He can also claim to have beaten Brazilian striker Neymar—one of the greatest footballers of all-time—in a freestyle battle.

Henderson was born in Cornwall and was passionate about sports from a young age. Encouraged by his parents, both of whom were involved in professional sports, he began playing rugby and was all set for a career in it. When he was 16, however, a freak accident during a game shattered his leg, breaking it in five places. At one point, he was told he may never walk again, but Henderson found the perfect way to fight back: Having seen online videos of freestyle football, which involves incredible, logic-defying ball tricks, he began balancing a ball on his head. Motivated to defy the doctors and the odds, he began practising and, just over 18 months after the break, was named UK Freestyle Football Champion for the first time, helped no doubt by a dedication that saw him training for up to 12 hours per day.

Today, it’s Henderson’s skills that are wowing people online: One video alone of his skills has amassed 9 million views. 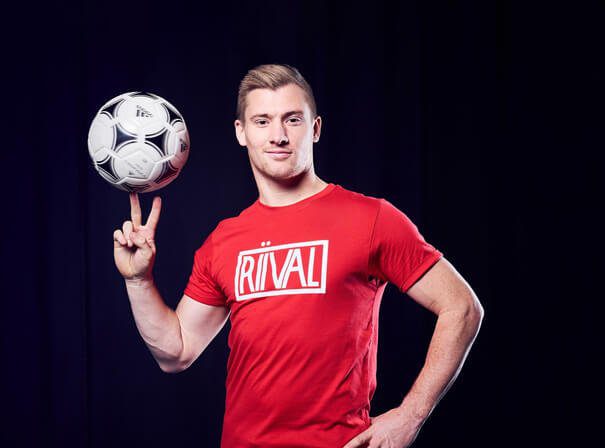