Widely considered one of the greatest badminton players of all time, Carolina Marin is an Olympic Gold medallist from Spain. Marin is four-time European Champion, three-time World Champion and the reigning Olympic Champion. She is the only female badminton player to have won three women’s singles championships (in 2014, 2015 and 2018) and has won a medal in nearly every BWF tournament. Marin is the former World No. 1 in the women’s singles, a position she held for a record 66 weeks. Marin has an indoor arena named after her in her hometown of Huelva, Spain.

Marin was a talented Flamenco dancer as a child before she took up badminton after seeing her friend playing the sport. Her playing career began at IES La Order in Huelva before she left to train at the National Centre in Madrid. Marin won her first international title at the Irish international in Dublin in 2009, and became the first Spanish player to win a gold medal at the European U-17 Junior Championships.

In 2013, she won the London Grand Prix Gold title becoming the first Spanish badminton player to win a Grand Prix Gold event. A year later, she became the first Spanish player to win a World Championship title after beating Li Xuerui of China. With her playing career on an unstoppable rise, she won five SuperSeries titles, a second World championship and became World number one in 2015. Marin achieved her lifetime ambition of winning Olympic gold in 2016, and went on to win a fourth European championship and third World title in the following years. Marin has recently made a sensational comeback after recovering from injury, and as always is one to watch in the upcoming Tokyo Olympics. 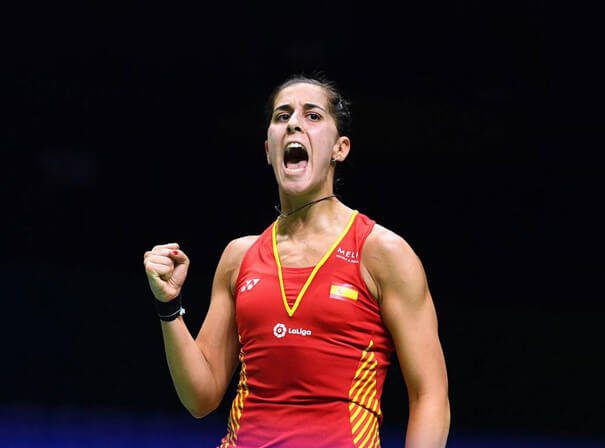